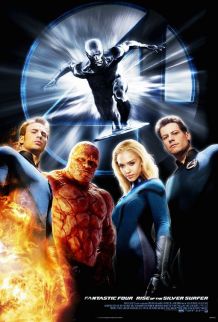 On Friday Night, I caught the opening night release of the new movie, Fantastic Four: Rise of the Silver Surfer.

In this movie, the entire cast has returned for the sequel. Ioan Gruffudd does an excellent job as Mr. Fantastic. Chris Evans personifies the The Human Torch quite well. Michael Chiklis makes a great Thing. When Jessica Alba was cast as the Invisible Woman in the first movie, I was in disbelief. I am sure she was cast to be the movie’s eye candy, but in all reality, I can’t get over the fake blonde hair, and blue contacts hiding her natural appearance. She does the best she can as Sue Storm (The Invisible Woman), but she does not work for me in this role.

I have enjoyed Julian McMahon in his role on the TV show Nip/Tuck, but did not like his character as Dr. Doom in the first movie, and in this new movie, it almost seems as if they were trying to figure out a way to write him into the script.

The Good: The Special Effects were great. The new character in this film, The Silver Surfer (voiced by Laurence Fishburne) , was handled very well, and his story was right out of the comic books. There was plenty of humor and action in the film, and it moves pretty quickly. The cast all did a fine job.

The Bad: The story could have been so much better than it was, and the movie’s big climax, was a total let down. If they would have removed Dr. Doom out of the picture, and focused on the Silver Surfer’s story, it would have been much better.

I would be surprised if this movie surpasses Ghost Rider’s sales numbers ($115,802,976.00) from earlier in the year. I found that movie more enjoyable than this one.