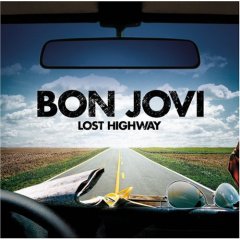 Some CD’s should come with yellow and black warning labels that say, “Play at your own Risk!”

Lost Highway is the CD that I knew I would have trouble listening to. The band has thrown away their hard rock sound, for a pop rock / country hybrid that sounds nothing like their past CD’s.

I found this CD completely devoid of the great hooks that Bon Jovi has been known for. If anything Lost Highway is a boring sellout that will probably be played to death on multiple radio formats. If Bon Jovi continues down this musical highway, I doubt they will be covered at the Hard Rock Hideout any longer.

Judging from the 63 used copies that I saw at Amazon today, Bon Jovi fans are discarding this disc faster than Mercury Nashville can print them.

There is one song that almost sounds like old Bon Jovi. If you listen to one song, play We Got It Going On. Load that song on your hard drive, then take the CD outside, and use it for a Clay Pigeon. You will get more enjoyment out of it that way.

The song Make a Memory is getting massive amounts of play on the radio right now, and has hit #1 on VH1’s Top 20 countdown.

I just don’t get it. I find this song, and disc boring. It is hard for me to believe that this is the same band that put out Slippery When Wet. If I was the guitar player, I think I would find myself in rehab. I would have drink myself into a coma, if I had to play these incredibly monotonous tunes.

Don’t waste your money on this CD. There are far better discs out there than this one.