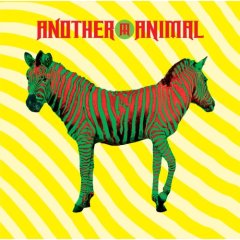 Another Animal is the side project of Godsmack members Tony Rombola, Lee Richards, Shannon Larkin and Robbie Merrill.

The band had a bunch of leftover songs in the Godsmack writing sessions and thus Another Animal was born.

It has been quite a while since I have heard Whitfield Crane sing, and I must admit that after hearing this CD, it made me want to seek out the W.C. discology. Whitfield’s voice is in top form here.

Broken Again is the first single off of this record, and if you have checked it out at the previous article at the Hard Rock Hideout, then you already know it is killer stuff. Chances are if you like the song Broken, Again you are going to love this CD.

Some of my other favorite cuts off this record are Left Behind, Black Coffee Blues and Fade Away. Fade Away is the least heavy song on this record, but Whit Crane’s voice really shines on this tune. This is going to be a massive hit for the band with a little bit of luck.

If you are a Godsmack fan, you are going to enjoy this disc. Fans of Whitfield Crane out to check this disc out as well!

For more information on Another Animal, check out their website here.