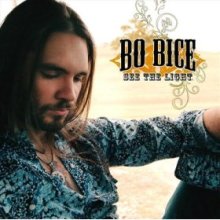 On this new release, Bo saw the light and got out of his American Idol contract, and put out a rock record in the style he wanted.

On this record, you will not find tunes written by Bon Jovi. Tom Keifer didn’t produce any of the tunes. No help from AI trusted pop song writers are present on this disc. This is pure Bo Bice. He wrote the songs himself, and enlisted a little help from producer Frank Liddell to craft ten tunes of pure rock goodness.

See The Light is not a hard rock record by any means, but is a good rock record the falls somewhere in between the Rolling Stones and The Eagles. Chances are if you like Classic Rock from the 70’s, you are going to find a lot to enjoy on See The Light.

The tunes are well written, the guitar work by Bice and Philip Shouse is very good. Bice also enlists the help of keyboardist Thomas Lee, who plays some guitar and keyboards. Thomas is no strange to Bice fans, as he has accompanied Bo on his 2006 tour.

I already have several favorite cuts on this disc including Witness, Got Money and Whiskey, Women & Time. My wife and I, saw Bo Bice and his band Sugar Money perform Got Money in February of 2006, at the House of Blues in Cleveland, OH. I have been clamoring to get my hands on a copy of that tune for over a year now. I am overjoyed to find it here.

Whiskey, Women & Time, and Sinner in a Sin are both tunes that were only available on the Dual Disc DVD side of Bo’s debut effort, The Real Thing. Both songs are concert staples, that I have heard Bice perform several times. The versions of these songs are far better and have a different arrangement than the versions on that record, so they don’t feel like rehashed songs at all. These are well written, and time tested tunes. Bo Bice fans that have seen him live, already love these songs. Chances are, new fans will too!

As a whole, the songs on See the Light surpass those on the debut disc in just about every way possible. If you haven’t ever given Bo Bice a chance because he was on American Idol, now is the best time to jump on board and see what Bo Bice is all about. You can find this disc at Wal-mart stores everywhere.

The video below, is for the first single “Witness”! Enjoy the video and go get your own copy today!

The Musicians on See the Light are: