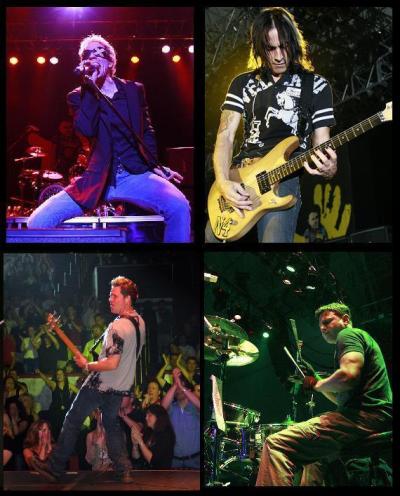 EXTREME REJOIN FORCES FOR NEW ALBUM AND TOUR IN 2008

EXTREME are set to return in the spring of 2008 with their first album of all new material in 13 years. The band features original members NUNO BETTENCOURT (guitar), GARY CHERONE (vocals) and PAT BADGER (bass), along with new drummer KEVIN FIGUEIREDO.

In the coming weeks, EXTREME will announce their plans for a world tour in 2008 as well as a release date and label for the as yet untitled album, which is being produced by BETTENCOURT, who says: “It will have all the ingredients of an EXTREME record. The music is always Funkier than most rock bands—and born a Bipolar Bastard child of Mr. Zeppelin and Mrs. Beatles.”

The Grammy-nominated EXTREME have released four albums, plus two greatest hits sets—selling over 10 million records worldwide—and completed multiple world tours. They also achieved a 1 hit single, “More Than Words”—from their 1990 multi-platinum album Extreme II: Pornograffitti—on the Billboard Hot 100, which they followed with the Top Five “Hole Hearted.” Although these two acoustic hits brought the band great mainstream success, it overshadowed the band’s trademark sound: a mix of hard rock funk in the spirit and style of their predecessors Led Zeppelin, Aerosmith, Queen and Van Halen—fueled by BETTENCOURT’s signature guitar flights and CHERONE’s resonant vocals—and matched with a social consciousness in their lyrics. A career highlight came for EXTREME when Queen’s Brian May asked them to perform at the Freddie Mercury Tribute concert in 1992, which gave the band considerable credibility beyond the hard rock fraternity.

EXTREME have been introduced to a new generation of music fans who are connecting with the band through MySpace as a result of the inclusion of their song “Play With Me” on 2007’s “Guitar Hero” video game. Outside of EXTREME, CHERONE joined Van Halen as lead singer in 1998, co-writing the Van Halen III album and touring the world with them. BETTENCOURT joined up with Jane’s Addiction front man Perry Farrell to form the band Satellite Party and co-produce their album Ultra Payloaded. Satellite Party also consisted of drummer KEVIN FIGUIEREDO, whom was previously in a band with BETTENCOURT called Dramagods.

Through the years, BETTENCOURT and CHERONE have remained close and continued to collaborate on occasion. But what exactly inspired them to rejoin forces as EXTREME?

“Rock and Roll Famine…I know it might sound crazy, but there is a massive shortage of rock and roll on this planet,” says BETTENCOURT. “It’s almost extinct. I mean the true spirit of quality rock and roll—you know, Musicianship, when you would give up every moment of your day to master your instrument and create your own identity and sound so as to respectfully outdo all your past heroes whilst proudly wearing the badge of their influences.”

“Passion,” says BETTENCOURT, is what drives EXTREME. “To do whatever it takes, with integrity, to bring music to the people, not because of fame…but just cause you simply couldn’t wait to share it with them.”

“We realized,” adds BETTENCOURT, “not only are the people starved for rock and roll…So are we. Let’s eat.”

Look for the Boston-based group to perform Saturday, December 1 at the Boston Music Awards at the Orpheum Theatre.

Here is Extreme’s video for Get The Funk Out!