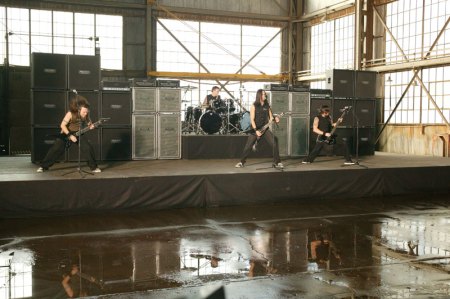 It’s still two weeks before the official U.S. radio add date, but Welsh metalers BULLET FOR MY VALENTINE are already HOT at U.S. radio with “Scream Aim Fire,” the title track from their upcoming album, out January 29. Check this out:

For next week’s charts, “Scream Aim Fire” is

Music Week, the UK’s record industry major trade magazine, wrote about the track, “Lifted from their brilliant second album, this lead track bears the hallmarks of Metallica in their prime…”

And if that’s not enough, the band is the #2 major label metal band across all of MySpace.

“Scream Aim Fire” is the title track from Bullet For My Valentine’s sophomore release, due out January 29. The band saw their 2006 debut album, “The Poison,” dubbed “One of the finest debut albums in rock history” by a major UK daily, while it sailed past the million sales mark – selling 350,000 in the U.S. alone.

“Scream Aim Fire” was produced by Colin Richardson (Machinehead, Funeral For A Friend) who also produced “The Poison,” and was recorded at Sonic Ranch near El Paso, TX earlier this year. The eleven new songs are, according to frontman Matthew Tuck, “really melodic heavy metal…catchy, hooky choruses and full-on vocals, with the music being very in-your-face and heavy…it’s a lot more up-tempo [than ‘The Poison’], a lot more aggressive.”

The four-piece metal core band from Bridgend, South Wales, UK – Matthew “Matt” Tuck/vocals, Michael “Padge” Paget/Guitar, Michael “Moose” Thomas/drums, and Jason “Jay” James/Bass – are, according to the UK’s Kerrang!, well on their way to “phase two of world domination” with the new disc. For “The Poison,” Bullet For My Valentine graced the covers – at least once – of Kerrang!, Rock Sound, and Metal Hammer. In addition, they won Metal Hammer’s 2006 “Golden God Award” for Best British Band, and the 2006 Kerrang! Award for “Best UK Single” for their track “Tears Don’t Fall.” Here in America, the band was named “British Import of the Year” in Revolver, and “The Poison” generated the hit singles “Tears Don’t Fall” and “All These Things I Hate (Revolve Around Me),” with the video for “All These Things I Hate” going to the #1 spot on MTV2.

Bullet For My Valentine will headline a tour of the UK and Europe starting in late January, and will then head to the U.S. in late February. Details to be announces shortly.

Bullet For My Valentine Hard Rock news
Leave A Comment   ↓