The Japanese band known as Flatbacker had two releases under their belt, before they were discovered by Gene Simmons of KISS who suggested the name change to EZO.

The band was signed to Geffen records and released a couple of albums in the late 80’s.

metal band. The band lost their deal with Geffen and broke up after this record was released. Their current whereabouts are unknown. Fire Fire is a very slicked produced record. EZO sounds like a million bucks on this disc. The tunes fall between somewhere between hard rock and heavy metal, and is in the vein of Loudness. Shoyo Iida’s fretwork does not disappoint on this record. Masaki Yamada is an above average singer/screamer. He even had a brief stint in Loudness

Fire Fire is a pretty good record for the most part. My favorite cuts are Love Junkie, the title track Fire Fire, Streetwalker, and Million Miles Away.

Both EZO records are a chore to find. If you are able to grab either one at a decent price, do so. They are pulling down big bucks on Ebay and on Amazon.com. Happy Hunting! 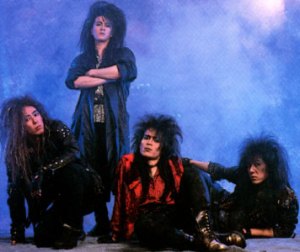