In 1992, Southgang released their sophomore effort, Group Therapy. This disc was released towards the end of late 80’s and early 90’s glam metal scene. The introduction of grunge killed any chance of Southgang maintaining any level of success.

It is a real shame too, as Group Therapy is a definite step up from the band’s debut CD, Tainted Angel. The songs on this record have a harder edge, and less of that pop metal sound found on the first album.

These Georgia boys went out in style, as Group Therapy is one great, hard rocking affair. Butch Walker added a bluesier style of guitar to the songs on this record, giving the band a better, more relevant hard rock sound.

There truly isn’t a bad song on this record. It rocks from

beginning to end! Some of my favorite cuts on this disc are Water Under the Bridge, Tug of War, and Culture Clash City.

Sadly, this is the band’s last record, and a I am guessing that a reunion is highly unlikely.

Mitch McLee, Jayce Fincher and Butch Walker went on to form the Marvelous 3 after the break up of Southgang, but are no longer together.

Group Therapy has been out of print for years. Used copies turn up from time to time at Amazon.com and Ebay, and well worth picking up. If you don’t own any records by Southgang, this is the one worth searching for.

Track Listing:
1. White Trash With Cash
2. Water Under the Bridge
3. Tug of War
4. Fire in Your Body 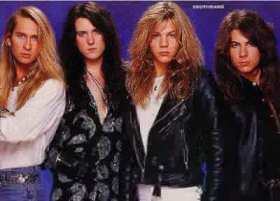