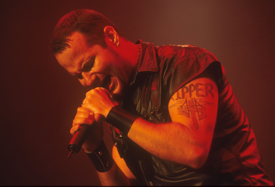 Malmsteen and Owens are hard at work on a new CD, which is currently scheduled for a July release.

Owens and Malmsteen previously collaborated on a cover of OZZY OSBOURNE’s “Mr. Crowley”, which appeared on the “Flying High Again: The World’s Greatest Tribute to Ozzy Osbourne”, released in March 2006 via Magick Records.