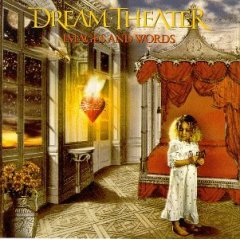 I still remember the day when I heard Pull Me Under on the radio for the first time. I was out of town for business in Detroit. The DJ didn’t say who it was, but I was immediately blown away. I had to know who this was, and quickly.

Images and Words is Dream Theater’s second release, and the first for singer James Labrie. The first CD, When Dream and Day Unite, didn’t take off, and the band’s singer Charlie Dominici was fired. The band didn’t start gaining success until James Labrie joined the group.

I did not start paying attention to this genre of metal until I heard this album. Images

and Words offers a somewhat unique style that was certainly ground breaking to me, and many others. The musicianship on this record is nothing short of stellar. John Petrucci showcases his awesome guitar skills, and Mike Portnoy proves to be one of the best drummers out there. James Labrie’s great voice ties it all together for one nice package.

There are a few songs that blend well with mainstream metal including Pull Me Under, Another Day, and Take the Time. It isn’t until later in the album where you find gems like Metropolis Part 1, a nine minute monster of a song that seems to fly by. Dream Theater can craft heavy tunes, and turn on a dime, and create music that is AOR quality. They back up their tunes with incredible live performances. For this listener, Images and Words is still an extraordinary listening experience. This release is essential for all progressive rock and metal fans.