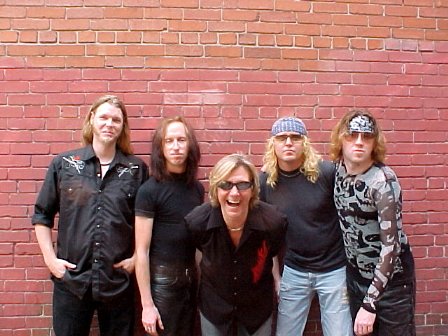 “For the past two weeks we’ve been going back and forth on the video for ‘Fill Your Head With Rock’, which we filmed right here in the back room at Planet Helix. The idea was to film it on high def in a small space to achieve a certain “look”, but after seeing the rough footage it was evident to us that our idea wasn’t working as intended. Not that the filming looked bad or that the bad didn’t perform-quite the contrary. It was more the fact that we tried to take an arena band and put it in a location which made us look small.

Initially John Hockley, who puts our stuff up on YouTube, put together a vid from my own footage that I filmed over the past couple of years with my Sony movie camera. Gord and I thought that it looked great and conveyed that feeling of ‘…being larger than life…’ that we wanted to portray to our fans. There were some things that needed to be changed however, so we set about to find more film and to effect some of the footage we already had. Amazingly, John used a $125.00 editing program to put it all together. The results speak for themselves. Expect the launch of the video Sunday night (March 30th).”