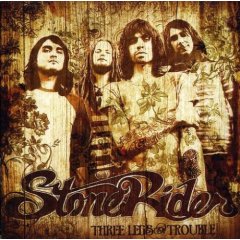 The band formerly known as Fight Paris, has a new CD out. This is a 2nd debut of sorts for this Georgia 4 piece. The band parted ways with their original name, singer and sound. Originally, Fight Paris was a hardcore outfit. As Stonerider, they have done a transformation of sorts, chaning their sound to a hard/classic rock type of sound.

Knowing that the Stonerider are on the road with Endeverafter and Airbourne, made their CD, Three Legs of Trouble one that I must check out. After listening to this disc a few times over the last couple of weeks, I can say I am glad that I picked this disc up.

The opening cut Rush Hour, Baby holds a lot of Led Zeppelin like style to it, while maintaining some killer groove. This is an excellent way to start off of a disc, and one of the best new songs I have heard in a while.

Back from the Dead keeps the pace going, and there are more Page-like guitar riffs throughout this tune.

I love the funky groove of Ramble Down. This song has a more Hendrix vibe to it, than Zeppelin. It is a very cool song, and one of the better ones on Three Legs of Trouble.

At this point in the album, the band seems to have a more modern rocking vibe that is somewhere between Buckcherry and Tesla than anything close to the 70’s era of rock.

I have to admit that I could have done with out the cover of Nazareth’s Hair of the Dog. Far too many bands have covered this Nazareth tune, including, Britny Fox, Guns N’ Roses, Warrant, MSG and countless others. This has to be the most over covered song by rock bands today. The Stonerider’s version isn’t bad. It is actually kind of cool, but I have come to loathe this song, after hearing so many variations of it over the years.

Matt Tanner has a great rock voice. He has a slight raspiness to his voice, which works well with this music. The guitars of Matt Tanner and Neil Warren deliver a very good, hard rocking bluesy type of sound that so few bands today are able to reproduce.

Without question, there is a new player in the resurgence of classic rock. Stonerider is going to be one of bigger new bands out there, if they play their cards right. Their album, Three Legs of Trouble does not disappoint. It is definitely one of the better releases of 2008! Don’t miss this record!

You can preview some of the songs at Stonerider’s myspace page.

Track Listing:
1. Rush Hour, Baby
2. Back From the Dead
3. Ramble Down 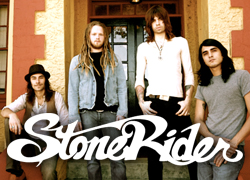