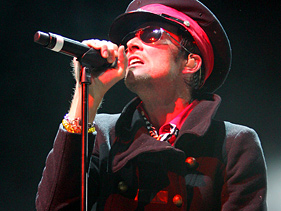 VELVET REVOLVER founding members Slash, Duff McKagan, Matt Sorum and Dave Kushner announced today (Tuesday, April 1) that they are parting ways with singer Scott Weiland. “This band is all about its fans and its music and Scott Weiland isn’t 100% committed to either,” said Slash in a press release. “Among other things, his increasingly erratic onstage behavior and personal problems have forced us to move on.”

Slash hinted in a recent interview that the band might carry on without Weiland, who announced onstage in Glasgow two weeks ago that fans were watching the “last tour” by the group. Weiland and drummer Matt Sorum proceeded to get into a public war of words online, fueling speculation that the band was splitting apart. But Slash told Classic Rock magazine, “Obviously I’m very aware of everything that’s going on. The only thing I can add to that is, in contrast to what Scott says, there will be a VELVET REVOLVER after this tour.” When asked if Weiland would continue as the singer, Slash added with a chuckle, “I have no comment on that.”

Weiland is reuniting with his previous outfit, STONE TEMPLE PILOTS, which broke up in 2002. The group has scheduled a press conference in Los Angeles for April 7 where it will announce a full tour of 50 or more dates for the summer and fall in addition to the handful of festival shows already confirmed.

Weiland spent a month in rehab recently, following an arrest for driving under the influence last November and his failure to show up for a VELVET REVOLVER gig at the Sundance Festival in January.

Despite the latest turmoil, bassist Duff McKagan told the U.K.’s Journal Live recently, “VELVET REVOLVER is something that’s going to be around for a long while yet.”