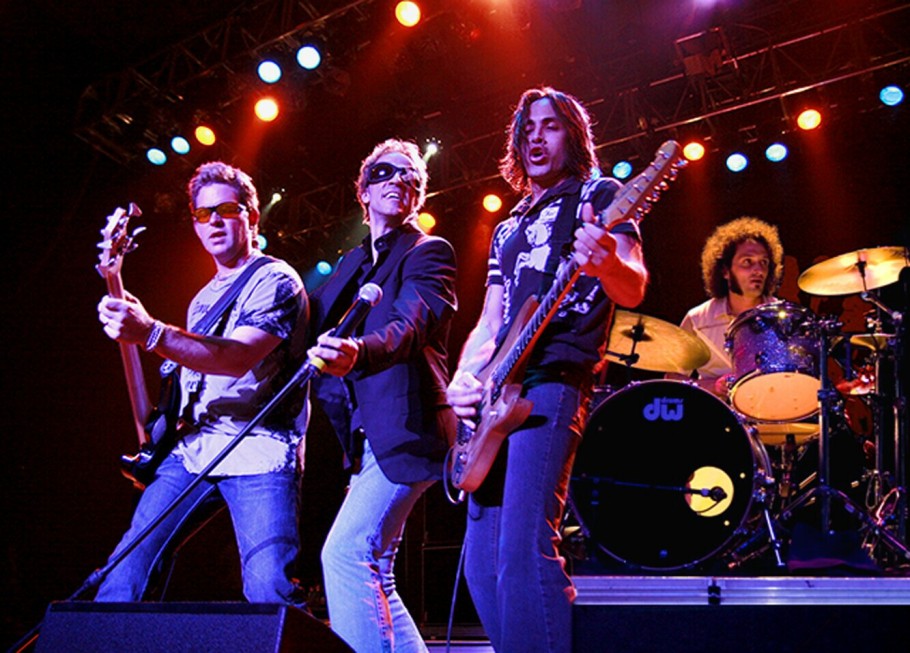 EXTREME will make their much-anticipated return to the stage this summer in support of Saudades de Rock (pronounced “sow-dodge”), their first studio album in 13 years. The multi-platinum, Boston-bred band’s 2008 Take Us Alive world tour gets underway on July 29th at The Chance in Poughkeepsie, N.Y. and will be anchored by a hometown gig two days later at the Bank of America Pavilion. In advance of the tour, Extreme will be a co-headliner on July 11th at the five day Rocklahoma Festival in Pryor, OK.

Information on the groundbreaking new album Saudades de Rock— which was produced by Bettencourt at L.A.’s NRG studios and is planned for release to coincide with the tour–is forthcoming. Fans can expect the same unwavering songcraft and diverse musical approach that made Extreme legendary. Simply put, Extreme’s fifth studio offering – which boasts the infectious roar of ‘Star’, the groove-laden swagger of ‘King’, a raw funk rock anthem called ‘Learn To Love’, and the expressive ballad ‘Ghost’ – just may be its finest hour yet.

As excited as the members of Extreme are by their latest musical accomplishment, they can’t wait to take it to the stage.

“As much as we enjoy recording, for me, I’ve always loved playing live for the fans,” Cherone says. “We can’t wait to get out there and play this music.”

“We wanted to record as much of the new album as possible live in the studio,” Bettencourt adds. “And because of it, these songs will translate easily to the stage. We’re really looking forward to getting out on tour, putting on a show. That’s really where the band shines.”

“We always knew Extreme was special,” the guitarist says of the completion of Extreme’s long-awaited fifth album. “We always knew it was a matter of time.”

The Grammy-nominated Extreme have released four studio albums to date, plus a greatest hits set. Selling over 10 million records worldwide on the strength of multiple world tours, the group achieved a 1 on Billboard’s Hot 100 in 1991 with ‘More Than Words‘. Culled from their 1990 multi-platinum album, Extreme II: Pornograffitti, the disc also produced the Top 5 hit ‘Hole Hearted’.

Although these two acoustic hits brought the band great mainstream success, they overshadowed the band’s trademark sound: a mix of hard rock funk in the spirit and style of their predecessors in LED ZEPPELIN, AEROSMITH, QUEEN and VAN HALEN. Fueled by Bettencourt’s signature guitar flights and Cherone’s resonant vocals, the band’s socially conscious lyrics set them apart from their peers. In 1992, the band was asked by Queen’s Brian May to perform at the Freddie Mercury Tribute concert. As the world watched, the band earned considerable credibility within and beyond the hard rock fraternity.

Extreme’s tour schedule has been updated and is now as follows: