Extreme’s debut CD hit the hair metal scene in 1989. I always thought their debut CD was a little hit
and miss. There are some good songs, and there are a few tunes that feel like filler material.

The one thing that propels Extreme past many of their peers is the superb guitar work of Nuno Bettencourt. Without Nuno, I often wonder if this band would have been a blip on the musical radar.

Bettencourt adds a funky groove to Extreme’s music that helps seperate them from so many of the bands that oversatured the music scene in the late 80’s and early 90’s. The band broke out in 1989 with several videos on MTV that launched a fairly solid career for Gary Cherone and company.

This self titled debut isn’t the band’s strongest effort by any means, but it is definitely worth a listen. Check out the songs Wind Me Up, Kid Ego, or the Play With Me, and you will certainly have a rocking good time.

This is one of those discs that you have to get out from time to time, if only to hear Bettencourt shred. His guitar work on Play With Me is worth the price of admission, all by itself.

Extreme has reunited in 2007, and will play the first show of their 2008 tour, at the Rocklahoma music festival in July. For more information on Extreme, check out their myspace page. 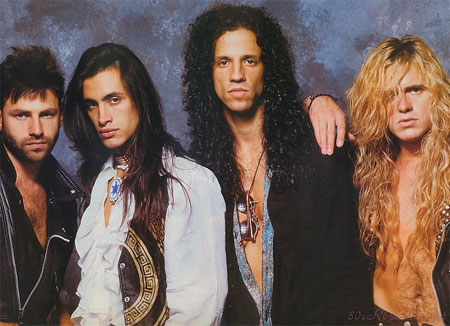