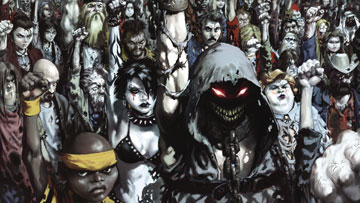 It is no secret that Todd McFarlane has been working closely ith the band Disturbed since he was approached in 2005 to design the cover art for the band’s latest album, Ten Thousand Fists. Designed and drawn by Todd McFarlane and Greg Capullo, the cover artwork features the sinister smile of Disturbed’s character, “The Guy,” surrounded by a massive throng of people with their fists thrust in the air.

David Draiman, lead singer of Disturbed, said of the album art: “We wanted to bring our old icon, the Disturbed smiley face, whom we call “The Guy,” to life. I came up with a concept that embodied what the record was about, “The Guy” leading an army of people from all walks of life and all colors of skin, with their fists raised in unison, as a symbol of unity, strength and defiance with an azure sky in the background. Being a fan of the Spawn comic book series and the artwork that Todd and his company have done in the past, we could think of no better team to bring this idea to life. We are incredibly pleased with the piece, and think it is the most striking and certainly our favorite of the three covers.”

The success of Todd’s involvement with the cover art of the album later led the band to request that Todd invest his artistic vision in the direction of a music video. Todd accepted the offer, and all four members of Disturbed visited the McFarlane Companies in Tempe, AZ to discuss various ideas for the video. Wanting to reference the album cover art, it was decided that the music video would be animated, starring “The Guy” and featuring many characters seen on the album cover.

Production began in February 2006, and now almost four months later, the video based on the song “Land of Confusion” is on the brink of its public debut. Todd and producer Terry Fitzgerald, has well as the entire animation studio in Korea, have spent countless hours designing the characters, perfecting the backgrounds, and editing the clips together to create a striking video with a powerful message. Disturbed’s “Land of Confusion” is a rerecording of the Genesis song, and like the original video, Disturbed’s own version is highly political. The 3 and a half minute video not only features characters recognizable from the band’s album cover, but also it features characters recognizable from the real world.

If you haven’t seen the original Genesis video, check it out below: