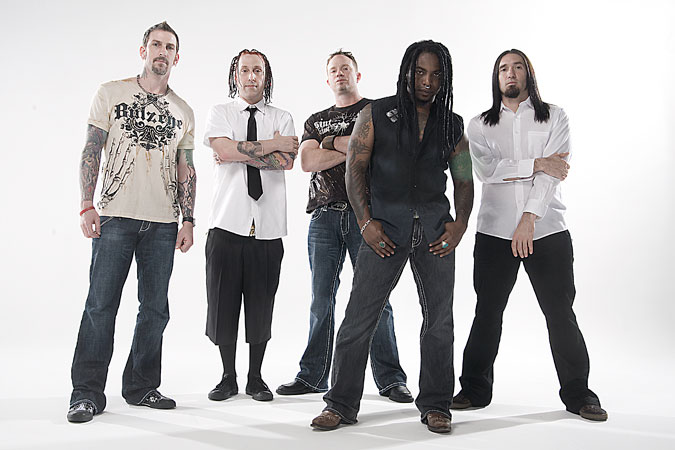 “Wow! We just got back from our trip over to Germany, Qatar and Afghanistan entertaining the troops. Which truthfully they entertained the hell out of us. First off we’re coming off a two day transit that started in Afghanistan that ended here in Atlanta for most of us and to say that the flights were long and delayed would be an understatement. I’m still in that dream state from lack of sleep. Between the time changes, different flights etc. it’s gonna be a few days before we pull it together and by the time we do we leave again to go back out which is par for the course for Sevendust.

I’m still processing everything we just went through over there so I’ll do my best to give you guys a preview of everything. First off, the trip started in Germany at a base there that housed a lot of families of deployed soldiers. We played a full on electric set that was cool but a lil strange at first because we saw alot of kids on shoulders and a family kinda of vibe and here we come out like CANNIBAL CORPSE. But turned out very emotional because of the words said by Lajon (Witherspoon) and the flag we were presented at the end of the show by some of the soldiers. After that show we continued over to another base in Germany and did another electric show. Both were very cool but now’s where it gets a lil interesting.

We leave to Qatar which is pronounced a few different ways by the troops but we liked the Cutter way of pronouncing! We land at night there and step off the plane at nice comfortable 105 temp. Sucked the wind out of your lungs the second we stepped off the plane. Walk through the airport and saw a lot of people staring at us with a ‘why the hell are you here and we want to kill you’ look on their face. Apparently Americans with piercings, tatts and southern accents aren’t the desired visitors of the middle east. We could feel the stares of hate on us in the custom line which for me was kinda scary. We were not in our comfort zone to say the least. After getting through customs we’re met on the other side by a couple soldiers that immediately greeted us with a nevermind them asshole greetings welcome. One of the soldiers that met us was named Cook and he was blinged out and funny as hell. He made us feel comfortable right off the bat. Both of the guys that picked us up started giving us info on the country, the war and everything else we asked which was a million questions. We got to the base in Qatar(cutter) which is a huge base there where soldiers go for a few days for RnR. No not rock n roll. That’d be too corny. Rest and recoup. Anyway, we spent two days there hanging and playing an acoustic show.

Next we go to fly to Afghanistan and we are soon to learn that no military flights they have us on leave on time for us. We’re pretty much a lil higher on the priority list than the mail and not much but they are fighting a war over there so we don’t mind. After we get through Qatar customs we get on a plane called a C17 which is a work horse plane they use to transport cargo from place to place. We were happy to get on that because the other option was a C130 which from what we here was a brutal ride. Anyway, got a chance to ride in the cockpit of the flight into Afghanistan and parts of the flight which was amazing. We were a lil nervous flying into here because as most of you know this is where a lot of the activity of the war is taking place.

We arrive after they do a combat landing which is a landing the planes do to avoid a straight approach and avoid any firing upon. Not your typical landing at all. We get there and after we land we get sorted out in our room which is what was referred to as the Bee Hut! All of us in a room with bunk beds. Oh before I forget we had a guy named Ben that was sent there to help guide us through all of this and work alongside Chris our tour manager during this, which was amazing by the way, that was with us the whole time. Anyway, right when we got settled in we had to take part in a falling soldier ceremony that they do when they lose a soldier there. Everyone on the base lines up on the streets of the base completely silent, hands behind back as the flagged covered casket goes through the streets and is saluted by the soldiers as it passes. It was very sad and made the war very real for us. Very powerful and made us realize what these men and woman are facing everyday over there.

After that we began hanging with the soldiers, meeting different Generals, shooting guns, riding to other bases on smaller planes, doing crazier combat landings, eating with the troops, playing acoustic shows where every person in the audience had a firearm, drinking a lot of water and basically being apart of their world for a few weeks. There’s soo much more I could go into but I’m sure the other guys in the band will post on here with even better details of our experience.

For me it was a very spiritual experience that I will never forget and look forward to doing again. I left with no acoustic guitars because during our last performance I gave one soldier a guitar and invited the same guy to smash another one to give our acoustic show a electric vibe. LOL!
We thank the troops and everyone else we met for being such amazing hosts and allowing us the chance to do our part and entertain those incredible people there. We love you and pray for a safe return for all of you!
Clint(7d)”