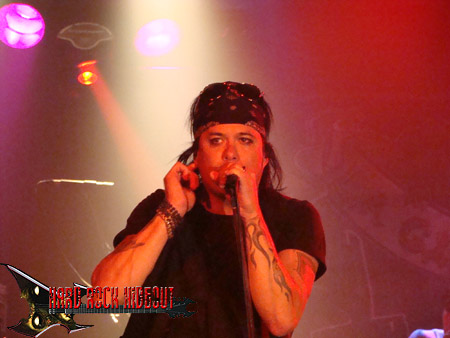 This is the first time that I have attended a show at this venue, and I must say, it is kind of cool. The building itself must have been used for a hangar or some other type of use, before it was converted into a concert hall/ bar. I don’t know if it had to do with the curved shape of the building, but this is the first concert in a long time, that I have not experienced the two day ear ringing after the show. It has nothing to do with the three bands that played. All of them were quite loud, and very rocking.

Bang Tango took the stage first at about 8:30 or so. The band started off with a cool cover of the T.Rex tune, 20th Century Boy. The rest of the set, in no certain order, had the following songs:

Attack of Life, Dancing on Coals, Someone Like You, Highway to Hell (AC/DC cover), Wrap My WIngs, and a few others that

It has been over fifteen years since I last saw Bang Tango. Joe Leste’ may be the only remaining original Bang Tango member, but the band still sounds damn good in 2008. Joe’s voice still sounds the same after all of these years. His trademark screechy vocals were damn near perfect last night.

His band is rounded out by Michael Thomas (Beautiful Creatures) and Ryan Seelbach on guitar, Lance Eric on Bass, and Timmy Russell (Beautiful Creatures) on drums. Michael Thomas proved to be a pretty solid axeman. Little did I realize that when Bang Tango was done, we would see him play again. More on that later. As a whole, Bang Tango was a lot better than I remembered them to be. I enjoyed their set, but the best music of the night was yet to come.

Check out the videos from the Bang Tango portion of the show below.

Stop back tomorrow for Part 2 of this concert review, featuring L.A. Guns.