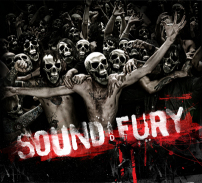 Sound And Fury Announces Dates With Airbourne
***
REJECT ALL THINGS POP FOR REAL, RAMPAGING, ROCK ON
DEBUT ALBUM, “SOUND AND FURY” OUT NOW!

Toronto’s high powered rock n’ roll powerhouse Sound & Fury have announced more dates with Australian rockers Airbourne, including a full European tour that will make stops in the UK, France Germany and Sweden. The announcement comes on the heels of the release of the band’s self-titled debut, which hit stores via Rebel Youth Records/MRI-RED Distribution and just prior to the band taking their in-your-face live show on a US tour with Goldfinger and Less Than Jake.

Sound and Fury, which also includes guitarists Daz and Griffin, bassist John Kerns, and drummer Chris Avalos, is all about power chords, no-bullshit rock ‘n roll, and total sonic assault, as evidenced by the lead-off turbo-charged single and video from ‘Sound and Fury,’ “18.” To view the video for “18″ online, go to http://www.soundandfury.com/rebelyouth/videos.htm. The Sammy Ray Welch-directed video shoot for “18” recently took place in an abandoned police station in Toronto, and featured lighting design input from A.J. Pen, who is known for his work with Linkin Park.

The band has also announced they will be giving away five pairs of tickets to each show for fans who join the Sound & Fury street-team at www.rebelyouth.com. Fans are encouraged to join the street-team to qualify for tickets, merchandise and a customized Guitar Hero game.

In addition to perfectly capturing their raw power on album, Sound and Fury has been gaining fans by the truckload by also opening up for Canada’s leading pop-punk band, Sum 41, throughout the great white north (as well as the U.K.). The group plays stripped down straight up rock n’ roll and was praised by PunkTV.ca for “combining iconoclastic AC/DC thunder, Misfits brooding, the raw impetuousness of the Pistols and the charismatic anthemic song styling’s of the Ramones.”

That said, the forthcoming Sound and Fury-Airbourne pairing is bound to be one wicked rock n’ roll party!