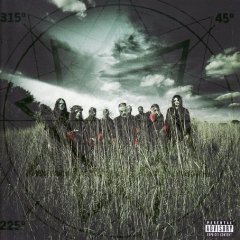 It has been 4 long years since Slipknot’s last studio album. “All Hope is Gone” is rumored to be (say it isn’t so!) their last album. Slipknot’s fan base has swelled to massive proportions over the years, and judging from the live show that I saw by them recently, this is a band that needs to continue.

“All Hope is Gone” pushes Slipknot further away from the Nu metal genre, and more towards the heavy and thrash metal side. This album is extremely heavy.  With that being said, most hard rock fans may dislike this, but metal heads will rejoice when they play this.

There are moments where this album is heavy as hell, and there are a couple of songs that seem to fall closer to Corey Taylor’s other band Stone Sour. In fact, the song “Snuff” is an acoustic based song, that is probably the least heavy song Slipknot has ever done. This tune seems to fall much closer to Stone Sour than anything Slipknot has done. I like this tune a lot, but the maggots (Slipknot fans) are going to flip out when they hear this.

One listen to “Sulfer” and I thought wow to myself.  What an incredible feast of metal this is. “Psychosocial” might be one of the coolest Slipknot tunes ever. The awesome groove on this tune had me hooked immediately.

Is it just me or do I hear “Metallica’s Enter Sandman” creeping its way into “Dead Memories”? This song sounds like a blend of Metallica and Tool.  This song is more of a mainstream metal tune.  Some songs on this disc such as “Gehenna”, “Dead Memories”, “Snuff” and “All Hope Is Gone” will get a ton of radio air play.  The rest may be far too heavy for terrestrial radio formats.

Is “All Hope is Gone” Slipknot’s best work?  While it has some great moments, I don’t think this disc stands up to their album Iowa.  While Iowa is still my favorite, I think Slipknot fans will like this.  The band hasn’t put out an album this brutal since their 1999 debut.

The sound on All Hope is Gone falls some where in between Iowa and Vol. 3.  There are things missing on All Hope is Gone that disappoints me.  The cool percussion and drums of Chris Fehn and Shawn Crahan are back on the song “Psychosocial”, but seem to be missing elsewhere.  I didn’t hear a lot of samples or use of the turntables on this record either.  There are a lot more guitar solos on this record than on past releases which is a nice addition.  As a whole, this is Slipknot’s sound moving in a slightly new direction.  “All Hope is Gone” is another solid effort and  is worth picking up.

For more information on Slipknot, check out their myspace page.