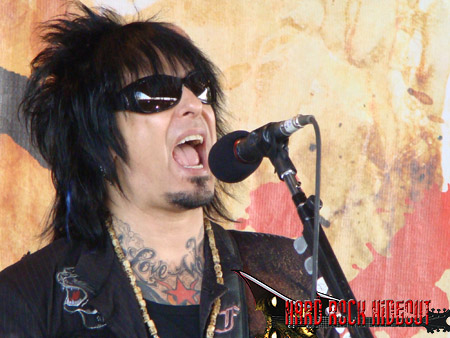 One thing that was pretty amazing at Cruefest, was how fast they tore down and set up the stage for the next band. If you were late getting to Cruefest, chances are you missed Trapt, and Sixx A.M. Luckily, I was there right at 5 for Cruefest, and I didn’t miss a minute of the action.

Sixx A.M. took the stage, and myself by surprise. I have listened to the Heroin Diaries several times 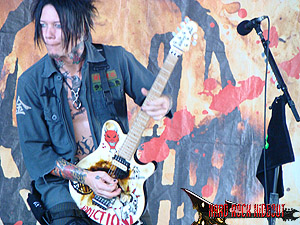 since its release, so I am pretty familiar with all of the songs, but I have never seen singer James Michael, or guitarist DJ Ashba live.

Sixx A.M. didn’t have the longest set, but the played all of the popular songs off The Heroin Diaries Soundtrack including, “Tomorrow”, “Accidents Can Happen”, “Pray For Me”, and closed out their set with “Life Is Beautiful”. I knew they would be good, but I didn’t expect to like them as much as I did. Sixx A.M. was excellent live, so good in fact that Nikki Sixx may have to do a second album with this group.

Nikki Sixx is obviously the star in this band. At no point did he try to upstage Michael or Ashba, in fact, I thought for Sixx A.M. being a side project that they appeared to have pretty good chemistry as a band. I would definitely pay to see these guys again! Sixx A.M. was certainly a highlight in Cruefest.