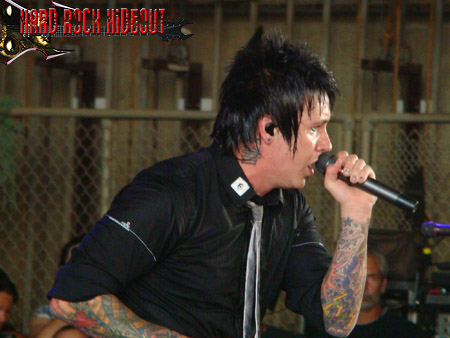 Sixx A.M.’s set was over way too fast.  The road crew had the stage ready for Papa Roach in record time.  I must admit that in the case of Papa Roach, they were one of the bands on the Cruefest bill that I did not care about.  I didn’t own any of their music.

I knew a few of their songs that I heard on the radio, but that was about the extent of it.

From the first second Papa Roach took the stage, I was pretty amazed.  Jacoby Shaddix is an extremely energetic front man.  He didn’t stand still for a second, and even came out into the crowd while singing a song.  (This also made it damn near impossible to get a good picture of him.)  The whole Papa Roach set was very high energy, and really got the crowd going. Their live set was so good that my personal opinion of the band went from “don’t care” to “draw“.  I would go see these guys again in a heart beat.

Papa Roach’s live set included the songs: “…To Be Loved“, “Forever“, “Time Is Running Out“, “Getting Away With Murder“, “Scars“, “Last Resort” and a brand new song, “I Almost Told You I Loved You“, which will be on the new Papa Roach CD, Metamorphisis, that will be released later this year. You can see the video for this song below.

After seeing Papa Roach live for the first time, I completely understand why they got the nod to open for Motley Crue, in Cruefest 2008.  I am glad they where there. They gained a bunch of new fans on the Cincinnati stop of the tour.