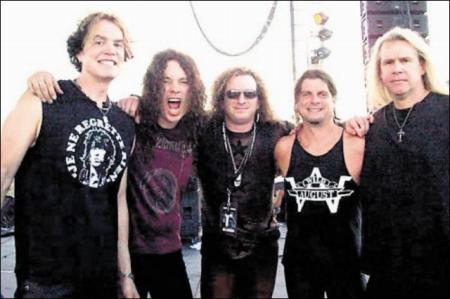 Dan McCafferty and Kurt Monson had figured their days as rockers in the 1980s hair band Wild August were over for good.

That was before the two Traverse City natives’ former group was rediscovered by Retrospect Records. The company now sells their old recordings on the Web and talked them into getting back together in July for the Rocklahoma music festival, where they played in front of tens of thousands of glam-rock fans.

“It was a great time,” said Monson, who played bass in the band and graduated from Traverse City High School in 1980. “We were all waiting for a reason to get back together. We rehearsed again, did the show and pulled it off.”

The group’s reunion is also the subject of a documentary being filmed by Lior Ben-Aharon. The screenwriter heard about the band because he is a neighbor of its singer, Sullivan Bigg in Los Angeles. He traveled to New York, where most of the band still lives, and to Oklahoma to film rehearsals and the concert.

He is editing the footage he already has and plans to reconnect with members in a few months to see if the opportunity to get back together has made a lasting impact on them.

“My angle with it is, ‘What is it like to get a chance to be a rock star for one more day?'” Ben-Aharon said. He hopes to get the movie on the film festival circuit.

McCafferty is older than Monson, having graduated from St. Francis High School in 1973. The two were acquaintances when they lived here, having played in competing bands in town.

Yet they didn’t become friends or band-mates until they both moved to New York City in the early ’80s. While there, they met through mutual friends and helped form Wild August.

The group had promise. It recorded on independent labels and opened for such acts as Slaughter, Warrant, Ace Frehley of Kiss and in what they said was a mismatch, Katrina and the Waves.

Yet just when they figured they were poised to break through — they were talking to major record labels and they made an appearance on the soap opera “Another World,” a performance that lives on through YouTube — the entire musical world changed.

“Right about our pinnacle was the time Nirvana came around and turned the whole thing on its head, which we kind of felt it needed to do,” Monson said.

The band was disappointed as the era of one-color guitars, leopard-skin tights and big hair ended.

Still, they stayed together until the mid-1990s, even trying to change with the times. But it seemed contrived for them, so they finally called it quits.

Monson now owns and operates a record studio. McCafferty is a studio and live guitarist around New York City and performs with Dee Snyder, formerly of Twisted Sister, and other acts.

In 2006, out of the blue, Retrospect Records contacted them wanting to re-release their music for a new audience.

“I just think their music is fun,” said Sam McCaslin, president of the company, which specializes in hard-rock re-issues. “All the guys are real talented musicians. The songs are very memorable; great hooks. And I liked their look too.”

The group has been one of Retrospect’s best sellers, with fans primarily in the United States, Japan and Germany ordering their CDs. The group also has old and new videos on its Myspace Web site: www.myspace.com/wildaugustband.

When Retrospect secured a stage at Rocklahoma in Pryor, Okla. this year, it asked Wild August to perform a set.

Being a nostalgia act, they dressed similarly to how they did back in the day, but toned it down a bit. They played the second day of the four-day festival, which also included bands like Ratt and Tesla.

Wild August members don’t know how long the newfound interest in them will last.

“It’s probably already over,” Monson said. “But it’s amazing how many younger fans are into this type of music now.”