The rock gods are smiling upon the Hard Rock Hideout today! 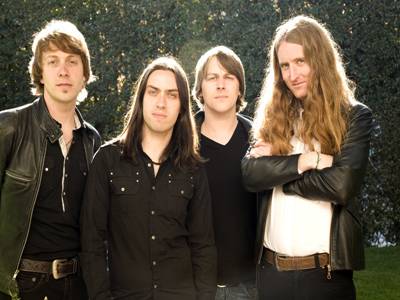 THE ANSWER, an emergent and award-winning rock band from Northern Ireland, has been selected as the opening act for the imminent North American leg of AC/DC’s Black Ice World Tour. The itinerary kicks off October 28 at the Wachovia Center in Wilkes-Barre, PA and concludes on January 31 at Nashville Sommet Centre, Nashville, TN.

Highlights on the road also include dates at NYC’s Madison Square Garden on November 12-13 and The Forum in Los Angeles on December 6. Prior to the AC/DC shows, The Answer will perform a unique US debut club headline show at as part of the RED CMJ music festival at The Crash Mansion, New York on October 25. This will be a rare opportunity to savor the band’s first-ever thunderous and explosive headlining club gig before they head off to tour with AC/DC.

The Black Ice World Tour represents THE ANSWER‘s debut tour of America, and AC/DC’s first outing since ’01. THE ANSWER, whose mammoth sound is often compared to Black Crowes and Free, are fully primed for stadium and arena shows and in Europe, they’ve opened concerts for the Rolling Stones, the Who, Aerosmith and other legendary bands. In addition, the group has headlined tours in the U.K., Europe, Japan and Australia, where their first album Rise was released to great acclaim and sold over 100,000 units on the Australia and U.K.-based independent label Albert Productions.

Says lead singer Cormac Neeson, “It is an honour and privilege for The Answer to be offered the opportunity to support probably the greatest rock ‘n’ roll act on the planet. We are incredibly humbled.”

Coinciding with the tour, THE ANSWER will also make its North American recording debut with the November 11 release of Never Too Late, a 4-song EP and bonus DVD featuring previously unseen footage, live performance highlights and exclusive band interviews. Only available in North America, the limited-edition 2-disc title is on the independent label THE END RECORDS, with distribution through Sony RED. The EP opens with the title track “Never Too Late,” a song that originally appeared on Rise, and which will also be featured on Activision’s forthcoming release of the hotly anticipated game Guitar Hero®: World Tour (due 10/26). The EP will be available at all retailers, online outlets and digital.

Other tracks on Never Too Late include the live recording “Come Follow Me” and the slow blues burner “The Doctor.” The EP also gives fans a taste of THE ANSWER’s forthcoming new album with “Highwater or Hell,” a preview of what will be the band’s first full-length release in North America. Slated for an early 2009 street date on THE END RECORDS, the new album was recorded in summer ’08 at Los Angeles studio Seedy Underbelly with John Travis (Kid Rock, Static-X, Killing Heidi, etc.) producing. It was mixed in Los Angeles by Tim Palmer and in Vancouver by Mike Fraser (who recently did AC/DC’s Black Ice).

THE ANSWER is comprised of four friends, musicians and songwriters from Downpatrick, a country town some twenty miles south of Belfast: Cormac Neeson (lead vocals), Paul Mahon (guitar), Micky Waters (bass) and James Heatley (drums). The U.K.’s Classic Rock Magazine voted them 2005’s Best New UK Band at their prestigious Classic Rock Roll of Honour Awards and called them, “The biggest new rock band of the decade.” Similarly, Kerrang! praised Rise as “the best British rock debut of the decade” and reviewed a U.K. live show by THE ANSWER as “F*@king stupendous.”

Get ready for THE ANSWER‘s invasion of America on October 28 as they hit the road with AC/DC!

THE ANSWER to open for AC/DC on their 2008 North American tour as follows:

Check out the Answer’s Video’s below!