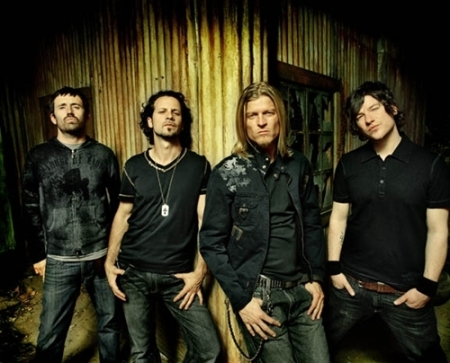 Puddle of Mudd currently have two singles climbing the charts and the band continues to circle the globe promoting their new album Famous. Planets aligned, deals were struck and Puddle of Mudd will be main stage at Rock Gone Wild. The festival is slated for August 20-23, 2009 in Algona, Iowa.

The guys in Puddle of Mudd are hardened road warriors and quite at home playing in front of capacity crowds. From their breakout single “Blurry” to their most recent hit “We Don’t Have to Look Back Now,” the band is poised to reign supreme among the modern rock kings. Their addition to the Rock Gone Wild lineup adds a unique twist to the ever-expanding festival roster.

The Midwestern band formed in 1993 as the music world was hitting a height of change. A handful of songs and years later, the band made their major label debut and garnered a string of Top 40 hits. To date, Puddle of Mudd has sold more than seven million records worldwide. Wesley Scantlin, Doug Ardito, Christian Stone and Ryan Yerdon are Puddle of Mudd.

Rock Gone Wild is Iowa’s preeminent music festival, featuring more than 50 bands on two stages over four debauchery-filled days. The festival is the only type of its kind in America to boast top music talent from four decades of hard rock.
Music fans can experience Rock Gone Wild in three different ways: platinum, VIP or general admission seating. For a breakdown of all seating tiers and to purchase tickets, please visit www.rockgonewild.com. Over the next few weeks,www.rockgonewild.com will become a virtual destination, complete with interactive contests and games as the countdown to Rock Gone Wild heats up.