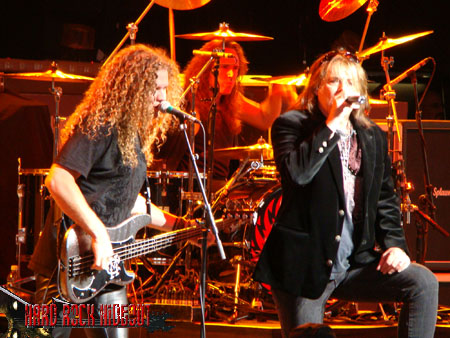 I must admit that I really wasn’t looking very forward to seeing Dokken.  I wasn’t very impressed by their new CD, and with Don Dokken being the only member of the original band left, this is more like the Don Dokken solo band.

Dokken guitarist Jon Levin, without question can play any guitar lick that George Lynch recorded before him, and does it quite well.  That was the highlight for me, when it came to Dokken’s set. Chris McCarvill from House of Lords played bass (covering for Barry Sparks who did not tour) and BJ Zampa (also from House of

Lords) played drums, covering for Mick Brown who was on tour with Ted Nugent. I never had the chance to see House of Lords play live, so it was to cool to at lease see a couple of the guys performing in Dokken’s band.

I don’t know if Don was trying to squeeze some high notes out of his crotch, but he wore a pair of jeans that both my wife and I thought was far too tight for a man of his age and size. As you can see in the video below, Don was skipping the higher vocals in Kiss of Death.  Amazingly, his newer song, “Standing On the Outside” sounds better than his Lynch era material.

“Intro (Without Warning)”, “Tooth and Nail”, “Into the Fire”
“Standing On the Outside”, “Dream Warriors”, “Just Got Lucky”, “Kiss of Death”, “Alone Again”, “Breaking The Chains” and “In My Dreams”

As much as I love the Lynch and Pilson era of Dokken, I think Don Dokken needs to find another bass player that can sing the higher parts that he can no longer reach.  Pilson’s vocals are still great missed in this band. Aside from Don’s diminished range in his vocals, Jon Levin‘s playing was excellent all night, and for the band having some fill in musicians, the songs sounded better than expected.

Check out the live clips from the show below.


Standing on the Outside/ Dream Warriors