GRAMMY-nominated modern rock band RED is preparing to release its second CD, INNOCENCE & INSTINCT, on February 10, 2009, via Essential Records. The disc features 10 songs, including its first single Fight Inside. The band will simultaneously release a Deluxe Edition of INNOCENCE & INSTINCT featuring four bonus tracks, the Death of Me music video, a making of documentary and more.

The Nashville-based group is currently touring the U.S. with Puddle Of Mudd–with a November 16 show at Highline Ballroom in New York City–through November 29, and will perform at select radio shows in December. Known for relentless touring and riveting live shows, RED–JASEN RAUCH (guitars), MICHAEL BARNES (vocals), ANTHONY ARMSTRONG (guitar) and RANDY ARMSTRONG (bass)–has logged an impressive 500+ live shows since releasing its End Of Silence debut album in 2006 and are giving fans a taste of its new music while on the road in late 2008. 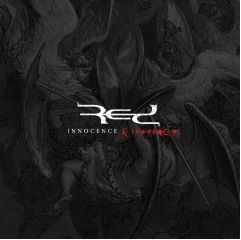 INNOCENCE & INSTINCT offers a primal and provocative look into the dark and sometimes seemingly hopeless fight inside each one of us, told through the powerful sphere of the bands hard-hitting music. Produced by award-winning Rob Graves and mixed by Ben Grosse (Disturbed, Depeche Mode, Sevendust), the provocative INNOCENCE & INSTINCT was forged in a perfect storm of inspiration and catastrophe. From the literary spark of Dantes Inferno to the bloody aftermath of a 75mph highway crash, RED absorbed a flood of ideas and emotions that empowered the band to create powerful and thought-provoking rock songs. Finding the sonic sweet spot where epic and primal converge, INNOCENCE & INSTINCT features dynamics that super-charge its innocence vs. instinct theme.

INNOCENCE & INSTINCT is about the duality of man, explains guitarist/songwriter RAUCH. The album examines the fight between our childlike innocence and the instinctive side that makes us do things we shouldnt. A lifetime is spent on this internal tug of war between who we really are and who we hope to be.

A highway crash in late 2007 accelerated the bands emotional core. As the tour van smashed into a guardrail and violently slid sideways across the highway, the band experienced new heights of horror that they channeled into INNOCENCE & INSTINCT. It brought an intensity and depth that we couldnt reach without going through this experience, RAUCH reflects. In the months after the accident, it felt like everything was in overdrive. In a split second, it changed our lives, adds six-stringer ANTHONY ARMSTRONG.

The disc is highlighted by its first Rock radio single, Fight Inside. The song is an anthem for what the entire album is about. On our first release, End of Silence, we addressed issues we struggled with, but this time its about the struggle itself, says guitarist-songwriter Jasen Rauch. It encapsulates the struggle between innocence and instinct that resonates through all the songs on this record. The music captures the internal tug-of-war inside all of us; between good and evil, light and darkness, spirit and flesh, exploring that fragile barrier between overcoming and being overcome.

Catch RED on tour in the following cities and go to www.myspace.com/dropofred for current band updates.