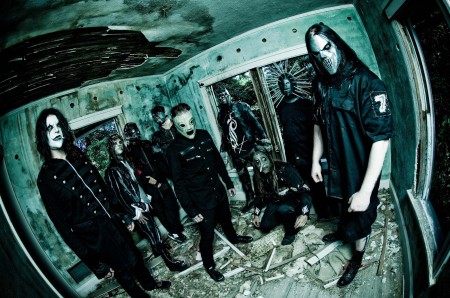 BAND RETURNS HOME IN SUPPORT OF

ALL HOPE IS GONE

Grammy-award winning hard rockers  Slipknot announced today their first U.S. headline tour in support of their 1 album All Hope Is Gone. The tour, which kicks off on January 23rd in St. Paul, MN, will hit 33 cities across the country, and include an historic stop at New York’s Madison Square Garden, a first for the band.  Coheed and Cambria and labelmates Trivium round out the bill.

Frontman Corey Taylor says of the trek, “2009 is the 10 year anniversary of the world’s first taste of this band.  To celebrate we are coming back out with a killer tour, a couple great bands and the same ferocity with which we attack life.  We want all of our maggots to come and celebrate with us, because if it wasn’t for you we wouldn’t have been here for 10 years.  Get ready for chaos!”

A special iTunes presale will start on December 3 and be open to those who took part in the band’s digital album presale earlier this year.  Internet presales via Ticketmaster, will commence on December 5, and the majority of dates will go on sale December 6th.

The All Hope Is Gone World Tour marks Slipknot’s first headline run in America since the release of the album in August.  The band is currently playing to sold out arenas on the other side of the globe; including stops in Russia, Japan, Australia, Europe and wrapping in the United Kingdom with three sold-out nights at London’s Hammersmith Apollo. Preceding All Hope Is Gone’s 1 debut, the band held the headline slot on this summer’s sold-out inaugural Rockstar Energy Mayhem Festival, which drew the biggest crowds to a metal festival since Slipknot played Ozzfest in 2004.

To celebrate the tour, Hard Drive, hosted by Lou Brutus will be airing a Slipknot All Hope is Gone World Tour Special from December 3rd-6th on radio stations all across the country. The special will feature exclusive live tracks from their current tour as well as candid interviews and other surprises.

The band has also launched a new website, allhopeisgone.com to coincide with the launch of the tour.  All pre-sale and onsale information will be made available there.

The dates are as follows: