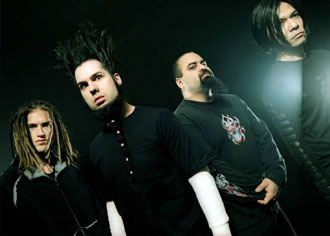 Los Angeles-based metal quartet Static-X have just announced the release of their first full-length live concert DVD, entitled Cannibal Killers Live, which will be released by Reprise Records on October 7th, 2008. The footage was shot during a show in Spokane, WA, on June 2, 2007, shortly after the release of the band’s latest studio album Cannibal. The 17-song set compiled from the tour includes material from Static-X’s entire 14-year career, showcasing old favorites like “Push It” and “Bled For Days,” along with newer songs from Cannibal, like the album single “Destroyer” and everything in between. Wayne Static, who dubs his brand of metal “evil disco,” posted the following message to fans on the band’s website: “Cannibal Killers Live looks and sounds absolutely awesome and I can’t wait to share it with you!”

A complete video history will also be included in the special package, with every video Static-X has ever made, along with an audio CD of the concert (track listing below). In addition, a limited-edition package will be released on October 7th that includes a bonus DVD featuring the band’s 1997 concert at Hollywood’s famous Whiskey A Go-Go club, which was recorded two years prior to the release of Static-X’s platinum-selling debut Wisconsin Death Trip.  Pre-order details will be announced shortly on the band’s website.

Static-X garnered rave reviews for their appearances on the mainstage at Ozzfest 2007. The Los Angeles Times praised them for pumping out “a tight, ultra-loud set of rhythm-obsessed ‘evil disco’.” The Seattle Post-Intelligencer noted that their “straight-up sonic brutality through feverish riffs and rhythmic bombasts cast shrapnel-like grenades into the audience,” while the O.C. Register raved: “Static-X found its groove early on, amping up the crowd with its brand of hyperactive dissonance.”

Cannibal, which was released April 3, 2007, debuted at Number 36 on Billboard’s Top 200 album chart, selling more than 30,000 its first week out. The album has gone on to sell more than 160,000 copies, solidifying the band’s place as one of the metal’s pre-eminent artists.

Static –X, which is Wayne Static (vocals, guitar, programming), Tony Campos (bass, backing vocals), Koichi Fukuda (lead guitar, keyboards, programming) and Nick Oshiro (drums) will go into the studio this fall for work on their sixth studio album, to be released in 2009.