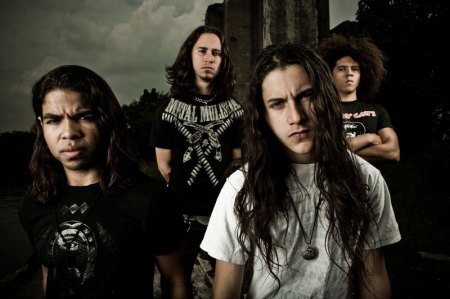 Armed with a slew of tour dates for 2009, Black Tide are primed to continue to light up crowds across the globe in support of their Interscope Records debut album “Light From Above.” The band will be part of the Kerrang! Relentless Energy Drink Tour kicking off January 13th in Belfast, then will join Escape The Fate beginning February 5th in Pomona, CA and will play their first Vans Warped Tour this summer.

From their mainstage stints on OZZfest 2007 and the inaugural Rockstar Energy Drink Mayhem Tour 2008 alongside Slipknot and Disturbed, to touring with Avenged Sevenfold and Bullet For My Valentine, Black Tide have become vicious road dogs, chomping at the bit to destroy any stage they can. On stage, the band’s music explodes with a raw vitality.

RollingStone named Black Tide one of the “Best Rookies of 2008” and “Metal’s New Teen Titans,” while Spin labeled them one of “The Next Big Things,” and calling them a “Band To Watch,” Revolver featured Black Tide on the August 2008 cover. Kerrang! declared the band to be the “Best International Newcomer” in 2008. In addition, Black Tide producer Johnny K (Staind, 3 Doors Down) has garnered a 2008 Producer of the Year Grammy nomination for his recent body of work including the band’s album “Light From Above.”

Black Tide is Gabriel Garcia (vocals, lead guitar), Zakk Sandler (bass), Steven Spence (drums) and Austin Diaz (guitar). Crafting infectious no- nonsense heavy metal anthems, the Florida quartet have become an unstoppable road machine. Amps cranked and bus stocked, the band will bring their brand of riotous old school-inspired thrash to audiences stateside and beyond in 2009. Sandler comments, “We love playing live, and we’re going to give it our all, and more, every night.”

The video below is Black Tide performing live at the Mayhem Festival in August.  Be sure to catch Black Tide live at one of the dates listed below!