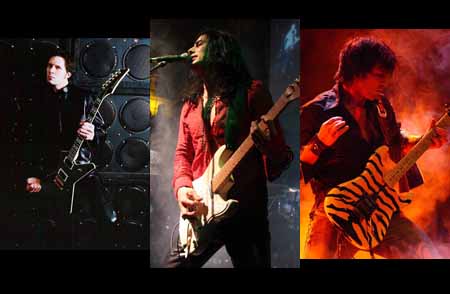 These three masters of the electric guitar will bring their unique styles, best songs, and most inspired solos to you LIVE. Each will have their own 45 minute set accompanied by their band, followed by an unforgettable encore jam with all three guitarists onstage at one time! Every show will rock, inspire your imagination, celebrate and remind you all why we are all part of… THE GUITAR GENERATION~

Paul Gilbert burst onto the guitar scene with his band RACER X when he was only 19. His astonishing technical prowess and imaginative use of the Makita power drill instantly gained him a reputation as a Founding Father of Shred Guitar. Paul went on to form “super-group”, MR. BIG and enjoyed No. 1 chart success and massive world tours. Paul has also released over 10 solo CDs, and his legendary instructional DVDs are revered as the best in the business.

Known for his extreme virtuoso on-stage playing, passionate musicality, and quick “tongue in cheek” wit, Paul’s live performances have become legendary. In the past year, he toured with “G3” (featuring Joe Satriani and John Petrucci) and also supported Satriani on a sold out UK tour.

Paul had such a remarkable time on the G3 Tour that he was eager to get back to the USA and create a stunning and unique show featuring his two impeccable fellow guitarist friends, George Lynch and Richie Kotzen….and the GUITAR GENERATION TOUR was born!

Inventing, re-inventing and pushing the limits of rock guitar is the lifelong pursuit of guitarist George Lynch. From his work with Exciter, Dokken, Lynch Mob his new band, Souls Of We, George is revered as one of the most influential rock guitarists of all time. George has also designed a new line of guitar products that give guitarists around the world the opportunity and capability to push their own limits.

With a career that spans nearly 30 years, George is one of a long line of guitarists to come from the California hard rock world. But one distinction that separates him from the rest of the pack is that he remains to be musically relevant. For some, success was fleeting but none have left their indelible mark like Lynch has. He has survived the shortcomings of the tangled music business and the changing tides in musical trends.

Much of George Lynch’s success is credited to guitarmanship; however his song writing helped propel five highly successful Dokken albums from 1983 to 1988 to the top of the charts and won him recognition as one of the most influential rock guitarists in modern music. Another distinction that separates him from others of this genre is that his guitar playing earned Dokken a Grammy nomination in 1989 for Best Rock Instrumental for the now legendary, “Mr.Scary.” With the new decade came a different George Lynch in the 1990s. A bolder stylist and more knowledgeable guitarist was found in him as he formed the band Lynch Mob. Recording two albums and going back on the road to support them kept Lynch in the public eye and garnered him rave reviews. But he was yearning for a further approach to the guitar. While still promoting his work with Lynch Mob, he began work on a solo endeavor titled, “Sacred Groove” which demonstrated Lynch’s capacity to display different musical and guitar styles.

Lynch will always be creatively busy while constantly evolving as a musician. As Lynch continues to broaden his musical scope, he will continue to influence fans for years to come as a player and song writer who is always on top of his game!

Richie Kotzen erupted onto the music scene as a guitar virtuoso at age 17. He recorded his first solo album on Shrapnel Records with four more solo albums to follow. By 19 Kotzen was approached by glam metal band Poison in which he wrote the #4 MTV Video and top 20 Billboard hit “STAND” on the Native Tongue album hitting platinum status soon thereafter. After Poison, Kotzen continued recording on various labels including Geffen, Shrapnel and JVC and joined a stint with famed bassist Stanley Clarke. Later that year Kotzen joined Mr. Big best known for their #1 hit song “JUST TO BE WITH YOU” stepping in for shred guitar guru Paul Gilbert.

Known for his soulful singing and captivating stage shows, Kotzen continues to solo on massive world tours. Kotzens popularity has grown to astronomical proportions in over 7 countries, where he regularly tours, landing him the opening slot as the opening act for the legendary Rolling Stones a Bigger Bang Tour in Japan.

Kotzen has released 17 solo albums, 9 collaborative/band albums, an instructional & home DVD landing him to the top of a multi-platinum career.

By invitation, Kotzen joined Paul Gilbert on stage at the House of Blues on Sunset Strip, where they tore down the house separately and collectively for an encore that proved big guitars and virtuoso players still rule the rock stage. In excitement to repeat this amazing synergy Kotzen accepted to join fellow guitarists and friends, Paul Gilbert and George Lynch for THE GUITAR GENERATION!

Get your tickets now – you never know who will show up on the stage and join this triple threat in action. For ticket information go to www.hob.com and info on the artists go to www.paulgilbert.com, www.georgelynch.com and www.richiekotzen.com