Towards the end of the hair metal era, Valentine released their debut album. Valentine’s sound was in the AOR/Melodic Rock style, with a little bit of hair metal flair for good measure. Valentine’s singer Hugo was a great new unheard talent, that should have propelled this band into mass appeal. He has a good range to his voice that is rarely heard amongst today’s rock singers.

This CD has it all, solid musicianship, great vocals and good songs. Those that got their hands on this disc treasure it, and those that didn’t get it while it was in print, have paid through the nose to acquire a copy off of Ebay or the like. This CD has been out of print for years and has been selling for $60.00 or more.

Sadly, this CD got very little promotion, and by 1994 the band had broken up.  I vaguely recall Valentine being a guest on a second rate talk show ( I can’t remember which one) but that was about the extent of the promotion this band, and CD received.  It is a shame as this is a very good disc that

very few people got to hear.

This CD will likely appeal to fans of bands like Journey, Hardline and other of the melodic rock style.

Valentine reunited last year, and have a new myspace page, where you can find out about the band’s latest happenings.

Valentine recently put out a blog that their songs will be available for download via Amazon.com and I-Tunes, but they are not available as of yet.  If you spot a copy of this CD, buy it, and give your significant other the ultimate Valentine! 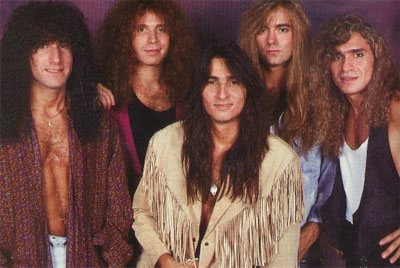