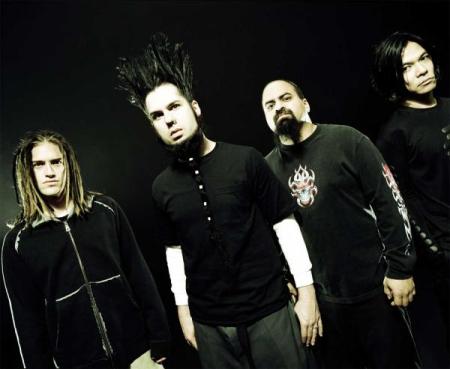 Burn Halo and The Flood Join In Support

CULT OF STATIC to be released March 17th on REPRISE RECORDS

Static-X and Saliva co-headline on Sno-Core, as it returns for its 13th year hitting the road April 1, 2009 in Albuquerque, NM.  The touring festival is the original winter lifestyle traveling fair featuring live music, and an integrated marketing experience.

Static-X will be hammering out their heaviest, most flammable work to date at Sno-Core 2009 in support of their new release CULT OF STATIC, on Reprise Records. The album marries the band’s aggressive driving force with disarming experimentation, a performance you do not want to miss.

Keeping the integral tones, Static-X encompasses shredding guitars with solos that have brought the band to a level of playing to be reckoned with. The cybernetic stomp of “Hypure” and “You Am I” bludgeon, bruise and break with precise grooves.  Elsewhere, the staccato riffs on “Terminal” crush through an unmistakable guitar tone. Guitarist Koichi Fukuda blazes through incendiary solos, while Tony Campos bolts down demonic bass lines and Nick Oshiro pounds out deadly rhythms. Front-man Wayne Static riffs pure violence and screams out his soul. “Over the years my voice has been destroyed from excessive touring… and I love it,” exclaims Static. “The vocals on the new record are raw and brutal.” The fiery raw quality of CULT OF STATIC is blatant as the first single “Stingwray” now on the  airwaves is climbing to the top.