Frontiers Records is delighted to announce the signing of Italian progressive metal band PATHOSRAY for the release of their upcoming second album, “Sunless Skies”.

PATHOSRAY was formed in 2000 by drummer Ivan Moni Bidin and vocalist Marco Sandron, later joined by bass player Fabio D’Amore, keyboardist Gianpaolo Rinaldi, and guitarist Alessio Velliscig. The band released their self titled debut album “Pathosray” through Sensory Records in late 2007, gathering a great response from the Progressive Metal communities all over the world.

In support of the release, PATHOSRAY played a few selected shows around Italy and in September 2008 the guys went to Atlanta, USA to perform for the first time abroad in front of an enthusiastic ProgPower USA Festival crowd. 2 weeks later they played at ProgPower Europe in Holland with similar responses.

The rest of 2008 was spent on writing and recording the new album, “Sunless Skies”, which was recorded at Artesonika Studios in Italy and mixed and mastered in Sweden by Johan Ornborg and Jens Bogren at Fascination Street Studios (Symphony X, Hammerfall, Opeth, Katatonia etc). 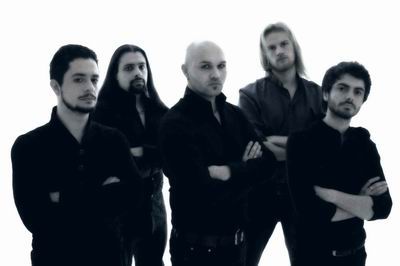 With a new record deal in place and an awesome new album to boot, PATHOSRAY are ready to climb the next step on the Progressive Metal ladder. Bassist Fabio D’Amore commented: “We’re all really happy and excited about the new album and the way how our sound evolved during these 2 years. The new recording deals, with Frontiers Records and Soundholic, will surely give “Sunless Skies” an extra value with the possibility to reach new fans and spreading our music in the best way possible! We’re extremely pleased to have the possibility to work with such respectable companies, also thanks to the amazing job that Intromental Management is doing for us!“

In connection with the upcoming release, set for May 25 in Europe and June 9 in USA on Frontiers/Super D, PATHOSRAY has been confirmed to play ProgPower Scandinavia Festival (alongside Pretty Maids, Freak Kitchen, Mercenary and more) in Copenhagen, Denmark on September 25th, 2009.

“2009 couldn’t have started better than this” said drummer Ivan Moni Bidin on behalf of the band,  “the excitement for the invitation to play at Prog Power Scandinavia in Denmark, with such big names, will give us the strength to keep improving and set up the best show possible!”

Crown Of Thorns, Behind The Shadows, Aurora, Quantic Enigma, In Your Arms, Sons Of The Sunless Sky, The Coldest Lullaby, Perpetual Eclipse, Poltergeist, For the Last Time (bonus track).