There are very few times, especially in today’s music scene, where a band actually lives up to the hype that precedes them. For Chicago based rockers the Last Vegas they not only live up to the hype on their new release “Whatever Gets You Off” they completely blow all those expectations out of the water. But then again, the Last Vegas is not just some new band that walked in off the streets and into the recording studio to record “Whatever Gets You Off”. The band has been releasing albums since 2004 and along with endless touring have definitely paid their rock ‘n roll dues, the fact they have Nikki Sixx helping drive the boat only helps take the band’s punk, sleaze/glam inspired rock to the next level. The only complaint I have about “Whatever Gets You Off” is the fact that six of the eleven songs on this album were also included on their 2008 self titled release. But for anyone hearing the guys for the first time that isn’t going to really matter.

The title track “Whatever Gets You Off” kicks off the whole shebang with a modern sounding  Dangerous Toys groove, especially at the chorus. The band as a whole absolutely smoke this song, but vocalist Chad Cherry and guitarist Adam D’ Arling especially stand out. D’Arling shreds his solo on this track and Cherry is so full of swagger and attitude it just spills all over this song. If you want a song to crank and piss the neighbors off this is definitely the song. “I’m Bad”, which is the first single and video, follows up with a thumping nasty groove laid down by drummer Nate Arling and bassist Danny Smash. “High Class Trash”  and “Loose Lips are two more swagger and attitude filled rockers with some great foot stomping grooves courtesy of some great bass lines from Danny Smash.

“Apologize” is probably the biggest surprise on “Whatever Gets You Off” after four straight up rockers, a piano and strings based dare I say power ballad with a great 70’s arena rock feel to it was the last thing I was expecting but the band is able to pull it off. You can definitely expect lighters and cell phones lighting up for this one if the band performs it live. “Cherry Red” gets the band back on track with a great sleazy groove and sing along chorus. “Dirty Things You Do” is a great stripper song with a Velvet Revolver feel to it. The remaining four songs on “Whatever Gets You Off” are all re-recorded versions of songs from the band’s last release other than a few subtle changes here and there, they are all note for note versions of the originals.

When summer finally comes around and the top comes off my Jeep “Whatever Gets You Off” is definitely one of the albums I will be blasting all summer long, much to the dismay of my neighbors.

1. Whatever Gets You Off 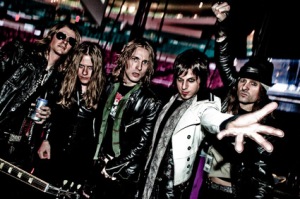 The Last Vegas are: