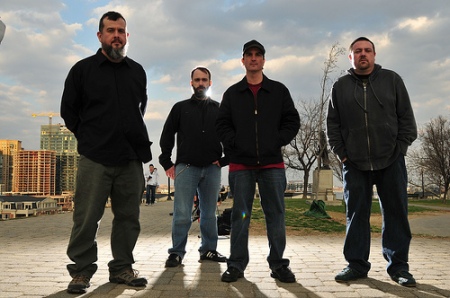 Veteran Maryland rock quartet CLUTCH are putting the finishing touches on their ninth studio album, titled Strange Cousins From the West. Produced by Clutch and J. Robbins at Magpie Cage Studios in Baltimore, the effort is the first Clutch original to be released on the band’s own Weathermaker Music, through RED Distribution. Label manager Jon Nardachone reports “Strange Cousins…” will be available both digitally and through retail on July 7th. He also reports the first single and video, “50,000 Unstoppable Watts” will be officially released prior to Memorial Day weekend.”

Also of note is the Poppo’s Blues Band cover song “Algo Ha Cambiado,” which vocalist Neil Fallon sings in Spanish. Poppo was a legendary Argentinian hard rock singer/guitarist throughout the 70’s and 80’s. The title Strange Cousins From the West was taken from a line in the song “Minotaur.” Although the band has toured the world extensively over the past 2 years, and released multiple Clutch oriented projects, Strange Cousins… is the band’s first original studio work since March of 2007’s From Beale Street to Oblivion which featured the hit “Electric Worry.”

Clutch is planning a 7 month worldwide headlining tour which takes flight in the US on May 6th with support acts Wino and Maylene & the Sons of Disaster, followed by a July US tour with Baroness as main support. Look for the band to appear on some popular music & art festivals including Austin City Limits later this Fall, UK’s mammoth Download Festival on June 14th and more to be announced.

STRANGE COUSINS FROM THE WEST TRACKLISING

*w/ Wino and Maylene and the Sons of Disaster