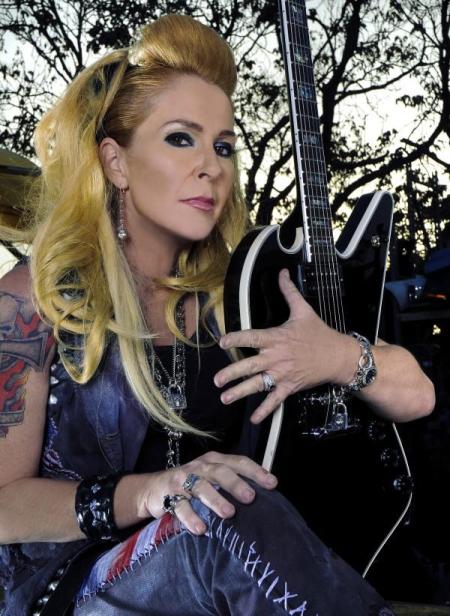 Can a beautiful woman whose family comes first be a hard rock icon and guitar star as well as a wife and mother of two boys? Sure, if she’s Lita Ford. After a 15-year hiatus from the rock’n’roll scene during which she married, moved to a remote Caribbean island, and started a family, the guitarist, singer and songwriter returns to the stage this summer to give her many fans a taste of her new album to be released this fall, Wicked Wonderland, and bring back to them the music that made her the Queen of Heavy Metal.

The album sizzles with the adult libidinal passion that Lita has found in her marriage to Jim Gillette, former lead singer of the band Nitro. Lita’s maturity and family life has anything but dampened her rock’n’roll fire, and in fact ignited her most fiery set of songs and brought even further force and finesse to her guitar playing.

As she has from the start of her career with The Runaways through her many accomplishments as a solo artist, Lita continues to blaze trails for women in rock’n’roll. Now it’s as “a great wife and a pretty cool mom that just happens to be a rock star,” as she describes herself today.

Over some three decades of rocking as hard as any man, Lita forged a legacy of hit songs, best-selling albums and sizzling live performances. But after marrying fellow rocker Gillette, she set stardom aside to excel in another endeavor. “I needed to raise my sons and I needed to get them to the point where it was okay for me to travel,” she explains as she now hits the road again. “I didn’t want to travel with two little infants.”

Instead, Lita and Gillette made their home on a small tropical island where she focused on rearing and home schooling the couple’s sons, James (now 12 years old) and Rocco (age seven). She devoted herself to family with the same focus and drive that made her a musical legend. “When you have a husband and two boys to take care of, you never have any spare time,” Lita explains. “I know there are a lot of other moms out there that know exactly what I am talking about.”

Just as Lita pioneered new modes for women in rock music, her unique family life demonstrates how high love and devotion to a husband and children can be as dynamic and cutting edge as her musical endeavors. She resumed her musical career after the decision was put to a family vote, with both of her kids in favor of her rocking again. As they said to her, “Mom — you’re Lita!”

“This album is what got me to leave the island life behind,” she explains. “It gave me an excuse to take my family all over the world. They love it and are very supportive and behind me every step of the way.”   Plus their travel together offers an extension of the boys’ home schooling as she plays festivals and other select dates in America and Europe this summer. “Now it’s educational to take them out and show them places like Sweden and Italy and tour all through the United States.”

And even her stage shows are a family affair. Gillette serves as road manager and joins his wife on some songs to sing backup vocals and a few duets. James — a budding guitarist and singer — and Rocco also join in on the fun during her sets. “They throw balloons into the audience and get the audience to sing along. ‘I can’t hear you!’ Stuff like that,” Lita reports.

With Gillette and the boys all sporting Mohawk haircuts and Mom rocking out in leather outfits and stiletto heel boots, the foursome hardly appear to be the average parents and kids on their summer travels. But as Gillette notes, “even though we look like ‘The Addams Family,’ we operate more like ‘Leave It To Beaver.’”

“When we meet somebody, they’re not sure what to make of us,” Lita observes. “We’re an abnormal family, but we’re very tight.”   Now that she is back in musical action, Lita would like to continue being an inspiration and role model for other women who rock. “I hope to set the path for even more female guitarists,” she says. “Bet we’ll be seeing a lot in the future.”