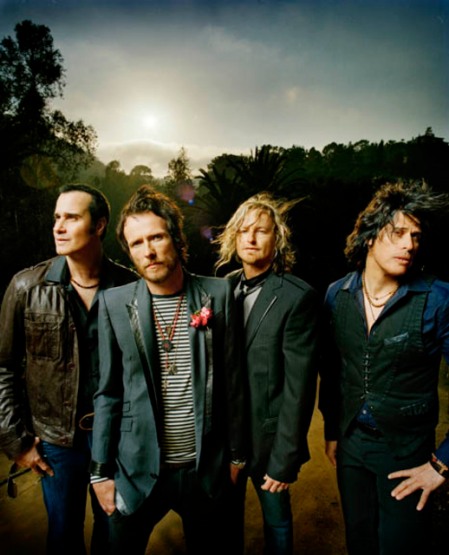 The newly created St. Jude Rock ‘n Roll Hope Show will kick off July 1 at the House of Blues in Los Angeles, California with rock icons Stone Temple Pilots headlining the first show. Tickets are set to go on sale to the public on Saturday, June 6 and will benefit St. Jude Children’s Research Hospital®, one of the world’s premier pediatric cancer research centers.

The St. Jude Rock ‘n Roll Hope Show is a charity concert event created by the grandson of St. Jude founder and TV icon Danny Thomas (“Make Room For Daddy,” “The Danny Thomas Show”), musician Jason Thomas Gordon, and digital entrepreneur/music manager Tom Carolan of Total Live Music. Together, Gordon and Carolan partnered with Live Nation to bring these remarkable concerts to the House of Blues venues across the country and beyond. The goal of these very special musical events is to raise money and awareness for the children of St. Jude.

The inaugural concert for The St. Jude Rock ‘n Roll Hope Show promises nothing short of excellence with the reunited Stone Temple Pilots performing for the hope and health of the children of St. Jude. Since the moment they appeared on the scene in the early ’90s, Stone Temple Pilots dominated the decade from start to finish, racking up 15 singles on the Billboard Top Ten, winning a “Best Hard Rock Performance” GRAMMY in 1994 for “Plush,” and having their five albums sell more than 35 million copies worldwide.

STP singer Scott Wieland had this to say about playing the event: “We are humbled, honored and filled with grace by being given this very special opportunity. To be asked to play the first of what we all hope will be many of these events for children in dire medical needs at the St. Jude Rock n Roll show. Reading the Press Release I am almost embarrassed as it lists accolades of a life of music. The good life. What the rest speaks of is the horrible but true realities that those diseases bring to children and these families.

“Hope has been found in breast cancer. My mother is a testament to that, but leukemia and other diseases seem to offer less ‘statistically.’ Let this be a night of hope and a night of faith and maybe even a little providence. Couldn’t we all use a little? God knows they should have it all from us on this special night, or any night. Once again, thank you.”

The July 1 concert will open with Jason Thomas Gordon’s band, Kingsize. The L.A.-based rock band recently released a duo of EP’s — “The Good Fight,” with their first single “Miss America,” and its sister EP “The Bad Night,” that counter-punched with “Rabbits.” During the past year, Kingsize has become one of L.A.’s most exciting new live acts with one of the band’s songs being chosen as the opening theme for CBS TV’s best new comedy “Gary Unmarried.”

“St. Jude is a part of my blood in the same way that music has always been. To bring them together is a great feeling,” said Gordon. “You always hear people say how music saved their life. A band or a song changed them, healed them in some way. Well, this is that expression being manifest in a very physical way. This is rock ‘n roll truly saving lives.”

St. Jude Children’s Research Hospital is internationally recognized for its pioneering work in finding cures and saving children with cancer and other catastrophic diseases. St. Jude is the first and only pediatric cancer center to be designated as a Comprehensive Cancer Center by the National Cancer Institute. Founded by the late entertainer Danny Thomas and based in Memphis, Tenn., St. Jude freely shares its discoveries with scientific and medical communities around the world. St. Jude is the only pediatric cancer research center where families never pay for treatment not covered by insurance. No child is ever denied treatment because of the family’s inability to pay. St. Jude is financially supported by ALSAC, its fundraising organization. For more information, please visit www.stjude.org.