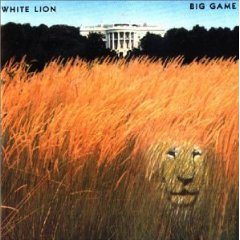 While bands like Twisted Sister and Whitesnake are celebrating the 25th anniversary of  some of their hit releases this year, they aren’t the only bands with big anniversaries in 2009.  Believe it or not, it has already been 20 years since the release of White Lion’s Big Game. “Big Game” turned the big 2-0 this month.

The songs on “Big Game” hardly need any introduction at all if you are classic hard rock fan. “Little Fighter”, “Cry for Freedom”, “Radar Love” and “Goin’ Home Tonight” have all been released as singles, and have been staples in White Lion’s live sets for years.

White Lion’s cover of Golden Earring’s “Radar Love” has probably gotten more radio air play than the rest of the songs on this disc since its release.  While I still prefer the original song, I thought this was a pretty good cover.

Mike Tramp’s vocals on “Big Game” are very good, and Vito Bratta’s guitar work is absolutely incredible.  Every time I listen to “Big Game” it makes me wish Bratta would rejoin White Lion, or another band and start playing live again. He is such a talented guitarist, it is a crying shame that we can’t hear him play these songs.

Although some may disagree, I thought there was at least one or two low points on “Big Game”. I didn’t care for the ballad, “Broken Home”.  It just didn’t work for me.  I tend to skip past this song.  I am also not fond of “If My Mind Is Evil”. Bratta’s playing on this tune makes it listenable for me.

Even with a couple of clunkers, there are a bunch of really good songs on “Big Game”.  “Dirty Woman” and “Let’s Get Crazy” could have easily been singles.  Both of these are really fun tunes. “Baby Be Mine” is quite infectious as well.

Even though this album didn’t top the charts, it is still my second most favorite release from White Lion. (“Fight to Survive” is still my favorite).  “Big Game” rocks harder than “Pride”, but not quite as hard as their debut.  It is worth picking up, especially if you haven’t checked out White Lion before.