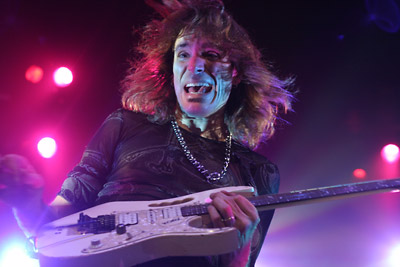 WHERE THE WILD THINGS ARE

Guitar legend Steve Vai will release his concert film and live CD Where The Wild Things Are September 29th, 2009 on Favored Nations Records. The show was recorded and filmed at the State Theatre in Minneapolis, MN before a sold-out audience as part of Vai’s successful Sound Theories world tour.

Where The Wild Things Are is Vai’s 21st solo project contributing to his 20,000,000 unit worldwide sales that have accumulated over his 30 year career. Vai chose the State Theatre to film because of its large, lush acoustics and the historical theatre’s gorgeous interior.

Vai is widely known for both his unprecedented guitar playing techniques and the unique design of his signature series Ibanez Jem guitar. But his fans have become inextricably drawn to his melodic depth, and dynamic stage performance. The continued evolution of his craft is made apparent in the astonishing musicianship presented in Where The Wild Things Are.

The 2 hour and 40 minute set contains several new tracks and re-orchestrated pieces culled from his rich catalog. His guitar-wielding extravaganza in “The Murder” is an artistic performance piece that must be seen to be believed.

“When I put a band and a show together I try to create an entertainment experience that I would like to have if I was sitting in the audience,” explains Vai. “I like to witness great musicianship but nothing too cerebral or overindulgent, I like to be stimulated by a large dynamic range of emotional intensities and melodic richness, I enjoy when people love their instrument and it shows by their oneness with it, I like to feel as though I’m part of a family with the audience and the band, and I like to walk away feeling uplifted and not beat up by somebody’s ego or the things they hate about themselves and the world. And of course I want a cool t-shirt.”

1. Paint Me Your Face

9. Shove The Sun Aside

20. The Audience Is Listening

Where The Wild Things Are is available on DVD, Blu-ray, and audio CD.