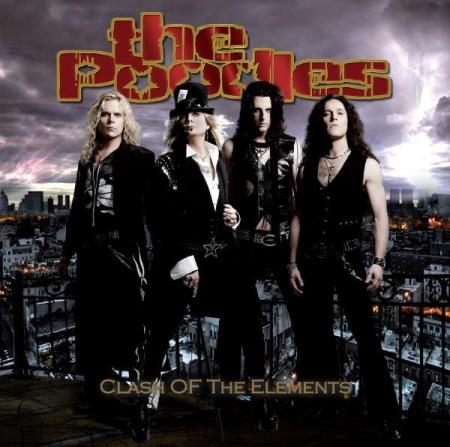 For those who have not heard the Poodles, you have no idea what an amazing band you are missing out on. The band has released two stellar albums in Europe “Metal Will Stand Tall” and “Sweet Trade”. With the release of their amazing new album “Clash of the Elements” the band hopes to finally break into the American music scene and once they do I think the sky is the limit for these Swedes. I recently had the opportunity to talk to bassist Pontus Egberg to tell me all about “the Poodles”.

HRH: For people that may not be familiar with the Poodles could you give us a brief history of the band?

Pontus: The band was formed in late 2005 when we had the opportunity to perform in the Swedish leg of the Eurovision Song Contest. For those of you who are not familiar with the Eurovision it is a contest for new music all over Europe, it’s a very big thing back home in Sweden, something like half the population of Sweden sit and watch the final on TV.

After the appearance in this contest the wheels started moving quite rapidly for The Poodles and in the spring of 2006 we released of debut album “Metal Will Stand Tall”. The rest of that year we basically spent on the roads in Sweden and in January of 2007 “Metal Will Stand Tall” was released all over Europe and we headed out on tour together with Hammerfall and Krokus, a trip that took us all over Europe with something like 31 shows in 35 days.

Back from that journey we started recording our sophomore album and with some touring back home in Sweden coming in between the album “Sweet Trade” was released in September of 2007. Right after the release we headed out on another journey through Europe, this time together with Swiss rockers Gotthard. During the spring of 2008 we hit the roads of Europe once again and this time as the headline act. The tour carried on through the summer back home in Sweden and after that we started the preparations for recording our third album.

“Clash Of The Elements” was released on the Swedish market May 20th of 2009, the early fall will see the European release and we really hope we will be able to officially release the album, or all of our albums, in the states really soon.

HRH:  The new album is titled “Clash of the Elements” is there a story behind the title?

Pontus: No, not really, it actually came up when we were discussing the album cover design. Someone had the idea to use the old symbols for the four different elements, earth, water, fire and air, and to do something with that. Then the title “Clash Of The Elements” came up and it fits really well with everything we do. First of all we’re four musicians and when we clash together sweet music comes out and we’ve always liked to mix different styles and to use elements in our music may not be typical for our style of music so that can also be a clash of the elements that ends up in something great, hopefully.

HRH:  This is the first album with Henrik Bergqvist and his playing is amazing. What was it like going into the studio with a new guitarist?

Pontus: It’s always a bit nerve wrecking, of course. We’d done two albums with our former guitar player and we weren’t sure what thing were going to sound like with Henrik but as you say yourself, his playing is simply amazing, he did a really good job. We weren’t that worried though, I must say, we had done quite a few live shows with Henrik and he had already blended in to the band in a fantastic way so we were pretty sure it was going to turn out great.

HRH:  Was the band surprised when Pontus Norgren announced he was leaving the band to join Hammerfall?

Pontus: Yeah, we were all taken a bit by surprise I guess but now, a little more than a year later, when Henrik has found his place in the band we’re all really happy. Henrik fills the spot of guitar player in The Poodles in the best possible way and I talk regularly to Pontus and it seems like he’s really happy in his new band.

HRH:  When it came time to find a replacement for Pontus did the band already have Henrik in mind or was there an audition process? If so how many guitarists did you audition before deciding on Henrik?

Pontus: Yes and yes. Henrik was one of the first names that came up but we had quite a few applicants for the spot so we sorted out the top four names, Henrik was one of them, and held auditions. After a day in the rehearsal studio playing with the different guys it was pretty clear that our first hunch had been right and Henrik was asked if he wanted the job and he accepted.

HRH:  When I compare “Sweet Trade” to “Clash of the Elements” I can here a big difference and growth in the songwriting. What was the songwriting process like for the band with the new album?

Pontus: The song writing process actually looked pretty much the same as on our previous albums. We’ve always liked to work with different songwriters in order to try to get the best possible song on our albums. We all contribute and I guess you could say Jakob is the common denominator to all of it because he’s involved in most of the songs in one way or the other. Then we sit with a whole bunch of songs and are having trouble choosing the top songs for the album. It usually works out pretty well though, no big fights or anything like that.

HRH:  Was Henrik involved in the writing process for “Clash of the Elements”?

Pontus: Yes, Henrik and I wrote a few songs together that we put in to the pile of music and one of them, Don’t Rescue Me, ended up on the album.

HRH:  When I listen to “Clash of the Elements” as well as “Sweet Trade” and “Metal Will Stand Tall” I hear Queen and Gotthard influence. Are they influences of the band? What are some of the other bands that have influenced the Poodles music?

Pontus: We’re all pretty much brought up on the classic Hard Rock and Heavy Metal of the ‘70s and ‘80s so I guess involuntarily we have a lot of influences from that style of music, bands like AC/DC, Aerosmith, Van Halen, Iron Maiden, and many, many more. Queen is definitely one of those bands. Gotthard though I had personally never heard before we toured with them in 2007. It’s a fantastic band so I don’t mind if there seems to be some of them in our music but that’s definitely unintentional. Apart from that, as I mentioned earlier, we really like and listen to and take influences from a lot of different styles of music, pop, classical, anything.

Pontus: Thank you! I think you made some very good choices there. I guess I could add “I Rule The Night”, “Heart Of Gold” and “Too Much Of Everything”. Favorite song to play live varies a bit from one night to the other but I would say, personally, that my favorite is probably “Thunderball”.

HRH:  What are the tour plans in supporting the new album? Is there any chance your fans in the U.S. will get to see you live?

Pontus: We are currently on tour back home in Sweden all through the summer and a tour of Europe is currently being put together and that is planed to start in October and will probably be a going on for a month or so. About the US, we would definitely like to come over and play for you guys and we are looking in to different options on how get our music properly released over there. If that falls in to place the way we want, who knows. I’m keeping my fingers crossed.

HRH: How many songs off “Clash of the Elements” will the band try to fit into the live set this time around?

Pontus: We currently play five songs from the new album in our live set, “Too Much Of Everything”, “Caroline”, “Like No Tomorrow”, “One Out Of Ten” and “I Rule The Night”. During the European tour this fall we will probably add one or two more songs from “Clash Of The Elements”

HRH:  When I wrote my review for “Clash of the Elements” I mentioned there was not an American A&R rep smart enough to sign the Poodles to an American recording contract. Has the band had any talks with U.S. record companies about getting your albums released here in the states?

Pontus: First of all let me say I really like that comment and yes, we’ve had talks and talks are still going on, right now as a matter a fact, and we really hope to get something together for the US this time around.

Pontus: No, actually I don’t. Real soon I hope.

Pontus: I actually have no idea what the reason for this is but I love it, it’s a great thing and I think the popularity of this style of music is growing, not only in Sweden, but in a lot of other places as well and that is a really good thing for anyone who plays or just enjoys this kind of music.

HRH: Is there a lot of competition between the different bands or is there camaraderie between the bands?

Pontus: A bit of competition is just a healthy thing I think but mostly I would say everyone is supportive; basically we all have the same goal and the same mission. We all work hard to reach out with our music.

HRH:  Did you know “Clash of the Elements” is the first and only album I have ever given a 10 guitar review for?

Pontus: No, I didn’t know this. Thanks a lot, I read the review and I’m still blushing. It’s really great to know that there are people on your side of the Atlantic who enjoy our music and it makes us want to come over there and play even more.

HRH: Is there anything else you would like to say to Poodle fans before we let you go?

Pontus: I would like to encourage you, if you like our music, to help us spread the word, talk to your local radio station or what ever and help us get The Poodles’ music out there. Then maybe some A&R rep will see things clearly and offer The Poodles a proper record deal in the States and we can come over and play for you all. We are certainly up for it.

HRH: Thank you for taking the time to talk to us, we really appreciate it.

Pontus: It’s been a pleasure and thanks for the support!!!