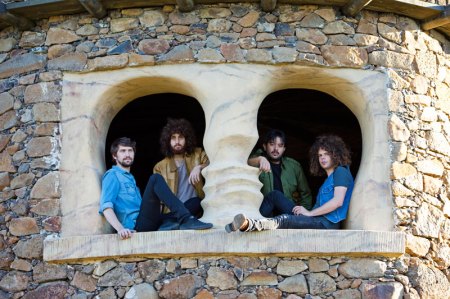 Wolfmother is back with sharpened chops, and the band will preview new material on the road this summer, including a run of shows with the Killers. The Sydney, Australia, rockers have joined on as the main support for six shows in the Northeastern U.S. and Canada, where they’ll unveil the songs they’ve spent months recording in L.A. Tickets are now on sale for the following dates:

Fans in L.A. can experience the whole album set to mind-blowing visuals on July 27 at the Laserium CyberTheater at the historic Vine Theater in Hollywood. Wolfmother also plays August 22nd at KROQ’s Epicenter ’09 festival at the Fairplex at Pomona in California.

The Grammy-winning four-piece recently dropped teaser track “Back Round” on iTunes, MySpace.com/wolfmother and wolfmother.com. And the foot-stomping, fuzz-drenched song will soon challenge players of Activision’s Guitar Hero 5. Wolfmother is also opening for AC/DC on its “Black Ice Tour,” beginning in February in 2010. The down-under tour, featuring two groups of Sydney’s finest sons, sold out faster than any in the Australia’s history.

Led by hirsute shredder Andrew Stockdale, the band cooked Cosmic Egg for three years, taking time to lock in a permanent lineup and build on the self-titled album that gave the world the insta-classic track “Woman.” They recorded over the course of two months with heralded UK producer Alan Moulder (Smashing Pumpkins, The Killers, My Bloody Valentine). His sweeping and storied career as an iconic record-maker coupled with Wolfmother’s immortal song craft add up to nothing short of a rip in the time-space continuum. But each one of these face-melting tunes was written to be played live and loud.

Wolfmother plans to headline a U.S. tour after the album’s release later this year.