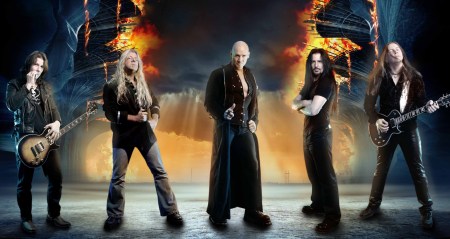 Up to the minute news directly from the Primal Fear camp, one day before the band starts their 16.6 trip to South America, some days later to North America!

South America
Ralf: It’s so cool that we can add Colombia to our map and rock there for the first time. We’re really sad that we can’t play Chile this time, but to come back in three beloved countries like Mexico, Argentina and Brazil is always a huge pleasure. I’m looking forward to present the songs of our new album to our loyal fans and rock the night. The communication and their enthusiasm in South America is always very special. There’s just one word to explain the atmosphere of a Primal Fear concert in South America: Electrifying!

North America
Henny: This will be an absolute highlight of my career. There can’t be one European musician out there who isn’t thrilled to tour the US with his own songs & music. Our target in Primal Fear was always to be known as a worldwide touring act and for me personally, it’s a real pleasure, that our focus is on North America in the coming month and in the next year. I know that the worldwide metalfans appreciate the consequence and tenacity of our course!

Alex: I must add, that I’m really excited to play with Primal Fear in South & North America. It’s a dream come true! I did a special work out during the last month to be in top shape for the shows and you know that the stage is my life. I will give more than 100% every day and I will enjoy every minute! It’s so great to be part of this tour!

Canada
Randy: Coming Home 🙂 ….. for me coming back to Canada to play with Primal Fear is a big thrill, not only because I’m from there, but because we’ve played there so little since I’ve been in the band. It will be great to finally play to the North American Primal Fear fans again too! I’m sure the shows will be rockin – I’ve only played in Canada ONCE since I moved over to Germany in 98, I can’t wait & see you all soon!

New Primal Fear Video Clip
Mat: we will shoot two new video clips during the next weeks. The first one will be released in September in connection with our TV campaign on iMusic TV and the second video clip will be released during the European tour in mid November! We will shoot a lot of interesting footage filmed in the forthcoming weeks, so we can present two really interesting clips for songs from the new album 16.6 – which songs? The first clip will have a South American, the second a North American vibe J

The European Tour
Ralf: It’s the same feeling & vibe this time as for all other territories. The difference is, that Europe is our home and especially this time, with the new 16.6 songs in the setlist, it will be something special. We feel so strong in the band now, that nothing can stop us!

Mat: I agree, it feels really good on stage and the new songs are perfect additions to our current Best-Of live set and our new found metal attitude. Even I miss my friend Magnus, Alex is doing a killer job. With Brainstorm on the bill in Europe, we have a fantastic second band with us and we’re working on another third great band to present an overall strong package for our fans. And it feels really good to have some good friends like Duce & Martin back in the team again!

Plans for 2010?
Frank Suepfle from ITM Agency: We’re already working on a second and longer run through North America and another European leg on the 16.6 tour before the festival season starts and we will play a lot of open air festivals next year!

Michael Kiske / Amanda Somerville
Mat: That’s my newest project and we’re working hard on the songwriting for the first album. It’s a pleasure to write & produce Michael’s next album and with Amanda as the co-singer it’s something very special. I wrote songs with Magnus and Jimmy Kresic for the album and we’re really excited about the songs. Eight tracks are pre-produced now and we need another two songs before we will start the real recordings. After Forever mainman Sander Gommans plans to join us and he’s working on new songs with Amanda at the moment! Look out for a melodic metal masterpiece in early 2010!

Ralf Scheepers Solo Album
Ralf: I’m still collecting ideas and riffs …. and I can’t wait to start the production together with Mat. I’ve signed a deal with Frontiers Records and we will make this happen during the coming months. I will welcome a lot of interesting guests and if my plan will come reality, it’s a dream come true with a killer concept and strong songs!

Rock Meets Classic
Mat: This will be a huge challenge for everybody involved. My good friend and well respected concert promoter Manfred Hertlein introduced me to Toto singer Bobby Kimball and some weeks later we had 14 dates booked in the finest venues of Germany & the Netherlands for January 2010. Featuring the originals singers of Foreinger – Lou Gramm, Nazareth – Dan McCafferty and Toto – Bobby Kimball – a killer classic rock line up! Maestro Philipp Maier from Dubai will write the arrangements and conduct the Prague Symphonic Orchestra. I will direct the RMC band & choir featuring Henny Wolter on guitar, Jimmy Kresic on keyboards, Martin Schmidt on drums plus Amanda Somerville, Verena Schock and Tiffany Krikland on backing vocals. Look out for an exciting eveneing and songs like Cold As Ice, Juke Box Hero, Hold The Line, Africa, Love Hurts or This Flight Tonight with a brandnew vibe! We’re aleady in negotiations for more concerts and to continue the project in 2011.

The Black Book
Randy: The Black Book is “An Introduction To Creative Metal Drumming” wil be my first ever drum DVD. On the dvd I’m playing along to original Primal Fear songs as well as a selection of songs from DuskMachine and past bands such as Annihilator, Skew Siskin and Rooky. Also include will be two drum solos (studio and live) and sections on basic to advanced rudiments, special parts from the songs broken down in real and slow motion time and various fills and stick tricks I’ve developed over my drumming career. There is also an interview where I’m talking about my life as a drummer from the day I started to the present. It looks likely that the DVD will be distributed by Hudson Music.

New Primal Fear DVD & Live CD
Mat: We will film footage with 3 cameras during every part of the forthcoming tour this year. We will start in South America, the US, Canada, Europe and later this year in Japan.  The show in Sao Paulo will be filmed by Patrick Kolb. We will shoot add. shows in Los Angeles, Atlanta, New York and Montreal. Good friend Bomber & his Visions In Fear team will film two shows in Switzerland and Germany. Achim Koehler will record selected shows on pro audio material. If everything will work out cool, we plan to work on a forthcoming DVD and Live CD for 2010 and if all involved people & companies  will support this release for the fans.

Mat Sinner New Book Project ……Prison Break? (The International Version)
Mat: I plan to write some interesting stories about the last three years during the forthcoming world tour and add them to with some unreleased pictures to my existing biography. „The Book Of Seven Seals“ was released in german language and is already collectors item. Now it’s time to end up some speculation, controversial stories, funny moments  rename the bio. My Sinner buddy and Metal Hammer journalist Christof Leim will review and edit the old version and this time, we will release an international version. I haven’t decided yet, if we will make a limited edition of the forthcoming Primal Fear DVD and add the book as a special present to our fans.

Japan & Primal Fear
Ralf: First of all, we want to thank all our loyal fans for all the super positive e-mails we’ve received about a forthcoming Tour in Japan. 16.6 reached the best chart entry in Japan of the entire Primal Fear career. We’ve got the word from our record company King Records and our agency that everybody is working hard on the subject! We are ready for our fans in Japan and if everything works out well, we will play some concerts during the next months!

Alex Beyrodt’s Last Words:
I’m totally happy and satisfied to be back with Primal Fear and I’m proud  to be a part of Primal Fear family! We know eachother for so long, shared a lot of great memories and hotel rooms. We’ve travelled thousands of miles together and Mat is my friend for a lifetime. The Primal Fear / UDO tour was one of the best experiences of my career The new songs are killer and new setlist is even more exciting than ever. I can’t wait to entert he stage in Mexico City and start my engine!

Henny Wolter’s Last Words
It’s my best time in Primal Fear! It feels really good and I’m enjoying every day in the band! If we’re on tour with the band, it makes me a lot of younger in seconds, it’s just like a big party with a lot of good friends. We’re working hard on every matter, but it’s always a pleasure, friendly, funny and creative. My comeback with the band was one of the best decisions I’ve made in my life. In the meantime, I know the guys very well and they are very talented and have a great humor!