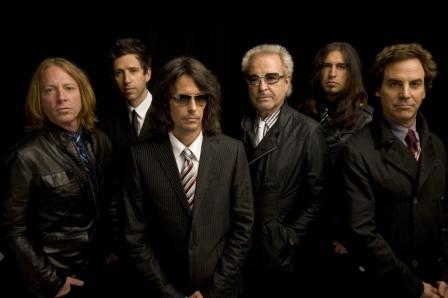 Race fans attending the Pepsi 500 at Auto Club Speedway on Oct. 11th will be part of history on more than one level.

Not only will those attending witness the “first” ever Chase for the NASCAR Sprint Cup race in Southern California, but they will also have the opportunity to be part of the “first” live performance video shoot of rock-and-roll legend Foreigner’s “Can’t Slow Down” at Southern California’s premier motorsports facility on Sunday, Oct. 11.  Fans wishing to take part in the taping should gather at the main stage in the Opportunity California Fanzone at 10:15 a.m.

“I have always been a diehard Formula One fan, but recently I had a NASCAR revelation. Now, as our new song says I ‘Can’t Slow Down’.  I have become a huge NASCAR fan and try to catch as many races as I can,” said Foreigner’s Mick Jones.  “NASCAR fans are our kind of people and that’s why we have chosen to film our new music video at Auto Club Speedway. I’m really looking forward to our future affiliation with a great community and hope everyone will come out to the Pepsi 500. ‘It Feels Like The First Time’ all over again.”

One of the world’s most popular and enduring rock bands, Foreigner will use Auto Club Speedway as the backdrop for its NASCAR-inspired title track to their new three-disc collection, including a CD album of all new music, a CD album of brand new remixes of the band’s original hit recordings, and a DVD of the band in concert and beyond. The release will be available from Rhino Entertainment Sept. 29, exclusively at Walmart.

Foreigner has sold more than 70 million albums worldwide. Their hits are a mainstay of Classic Rock radio and include “Feels Like The First Time”, “Hot Blooded”, “Urgent”, “Dirty White Boy”, “Juke Box Hero”, ‘Waiting for A Girl Like You”, ‘Head Games”, and their worldwide number one ’I Want To Know What Love Is”. Foreigner’s fourth album, Foreigner “4”, spent more weeks on the Billboard chart at number one than any album by AC/DC, Led Zeppelin, U 2, The Who, The Rolling Stones, Genesis, Phil Collins, Eric Clapton, and any artist in Atlantic Record’s 60 year history.

Foreigner’s race weekend performance is just a part of the iconic rock group’s larger collaboration with NASCAR.  The band’s integration into NASCAR nation will also

feature additional live performances at NASCAR events in 2009 and 2010, as well as a special video project that will include the NASCAR-inspired song “Can’t Slow Down.” NASCAR has had a history of at-track activations with several high-profile musical acts, including the Red Hot Chili Peppers, Nickelback, O.A.R. and recording artists Kelly Clarkson, LeAnn Rimes and Sheryl Crow.

To be part of history at Auto Club Speedway call 800-944-RACE (7223), or visit www.autoclubspeedway.com. Ticket offers start as low as $35 and including ticket packages to celebrate Hendrick Motorsports 25th Anniversary with Jeff Gordon and Dale Earnhardt, Jr.; a ticket deal to see the stars of NASCAR and the stars of TNA Wrestling’s Bound for Glory 2009; the chance to get up close and personal to Jimmie Johnson and so much more.

In addition to experience one of rock and roll’s greatest bands, fans experiencing Auto Club Speedway can also take advantage of free parking, bring in their own food, or partake in the unbelievable menu items on site as well as other cost-savings opportunities while enjoying a full day of entertainment and fun at a fantastic family value.

Catch all the action of the Pepsi 500 and the Chase for the NASCAR Sprint Cup on Oct. 11 starting at Noon PT on ABC.