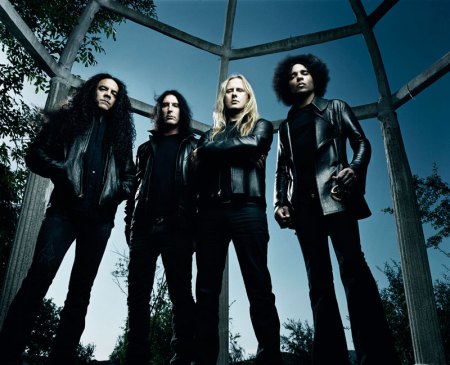 ALICE IN CHAINS has announced an October 27th release date for the BLACK GIVES WAY TO BLUE iPhone app. The app features full songs from the band’s acclaimed new album on Virgin/EMI, music videos, news, photos, social networking and much more. The app separates itself from the pack with an impressive level of interactivity; its custom-built functionality allows fans to interact with each of the album’s 11 tracks via a touch, drag, and hold feature that reveals hidden visual gems. A demo of the app can be viewed here: http://bit.ly/1VWXWZ

“With the Alice In Chains app, we wanted to represent every song on Black Gives Way To Blue as an interactive and immersive experience”, says Jeff Zakim, Senior Director, Global Digital Marketing, EMI Music. “We achieved that with the custom-designed Interactive Tracks. The interactivity is furthered by giving fans the ability to share, comment and connect across Fan Wall posts, email, Facebook and Twitter.”

Among the songs featured on the app, which will be available in most major markets, is lead single “Check My Brain,” which continues to hold the No. 1 spot on Billboard’s Top Rock Songs Chart. Fueled by the hit single, Black Gives Way To Blue entered Billboard’s Top 200 Albums Chart at No. 5, with sales exceeding 126,000 copies.