A CD that I have not mentioned soon enough at Hard Rock Hideout, is United States from the duo of Paul Gilbert & Freddie Nelson.  This is some of the most inspired playing hat I have heard from Paul Gilbert in quite some time.  Gilbert’s fretwork is nothing short of amazing on this CD.  While United States could have fallen short with a bunch of mindless guitar noodling, it simply does not. Gilbert’s solos are absolute perfection, and are enhanced by the amazing vocals of Freddie Nelson.

I do not know where Paul Gilbert found Freddie Nelson, but this guy is the most incredible new singer I have heard in quite some time.  There are times throughout United States where Nelson sounds a lot like Queen’s former front man, Freddie Mercury (R.I.P.).  He doesn’t come out sounding like a complete Mercury clone.  He has his own sound, and his vocals are nothing short of fantastic.

This CD has an interesting Yin and Yang factor to it.  Paul Gilbert’s playing and Freddie Nelson vocals greatly complement each other.  I don’t think this CD would work if either Gilbert or Nelson wasn’t on it.  Either way, I hope this is a collaboration that continues down the road.  This is some of Paul Gilbert’s finest work since his Mr. Big days.

United States is a one cool rockin’ CD.  You will be hard pressed to find a bad tune on this one.   I can’t imagine any rock fan not enjoying this CD.  If you aren’t hooked by the opening cut, “The Last Rock and Roll Star”, you will be after “I’m Not Addicted”. Great vocals, and great musicianship equals a great CD.

Fans of Queen & Mr. Bigneed to check this CD out asap!.  This will easily be one of my top CD’s of 2009.  Do not pass go. Do not collect two hundred dollars!! Buy this one now!! Highly Recommended! 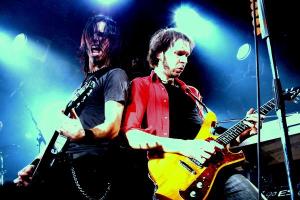