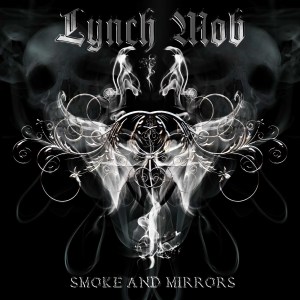 Commented Tichy: “It will be fun to get loud and powerful with George [Lynch], Oni [Logan] and Denim as I’ve always been a fan and I’d be a liar if I was to say I didn’t attempt to learn all his rhythms and leads on ‘Tooth and Nail’ [DOKKEN] in high school when I was 16! C’mon, he was tearing it up! I was obsessed with guitar back then, as I am now, and he was one of the cats… Well, he still is as so many people nowadays were influenced by him.”

“George is so cool that he came over my house with a little rig and he, myself and Denim had two days of jammin’ the tunes in my bedroom turned drum room. There was barely any space but we had a great time. Total high school vibe! I should have gotten a picture.”

Audio samples songs that appear on LYNCH MOB’s comeback album, “Smoke And Mirrors”, are available for download at the Frontiers website following this link:
http://www.frontiers.it/Default.aspx?tabid=85&pl=L

The CD was released in Europe on September 18 (October 13 in the U.S.) via Frontiers Records.