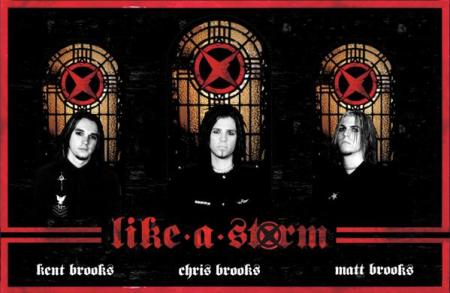 “LIKE A STORM” CONTINUES HEATING UP THE WINTER  BY ANNOUNCING NEW TOUR DATES WITH SHINEDOWN, PUDDLE OF MUDD, & SKILLET

After making their presence felt across North America by debuting at number 61 on Billboard’s New Artists Chart from tour sales alone of their head-turning debut album, “The End Of The Beginning”, New Zealand natives LIKE A STORM are gearing up for even more in 2010.

Fresh off of their wildly successful tour with Grammy-winners Creed and currently on the road with Veer Union, Like A Storm are winning fans nationwide with their haunting, powerful riffs and infectious melodies.   The band then gets to enjoy a short holiday break before heading back out on the road with Shinedown, Puddle of Mudd, and Skillet starting Jan. 22 in Albany, NY.

Based out of Vancouver, B.C. the quartet – composed of brothers Matt (vocals, guitars, programming, didgeridoo), Chris (vocals, guitar, programming) and Kent (bass, vocals, programming) Brooks plus drummer Thomas Karanasos – have entered the Midwest leg of their current tour and continue to win fans wherever they perform. The Veer Union tour wraps up just before Christmas on December 23rd in Spokane, WA.

Like A Storm’s adrenaline-packed music can also be heard on television, where their song “Enemy” is accompanying ESPN’s College GameDay football montage. Another featured track, “Lie To Me”, is serving as the theme song for TNA Wrestling’s Pay-Per-View show “Genesis, which airs January 17th, 2010.

Looking to start the New Year off strong, Like A Storm joins Shinedown, Puddle of Mudd, and Skillet to kick some major ass in the following cities:

Be on the lookout for future collaborations that are currently in the works, too. Like A Storm recently took time to shoot video for an “artist one-on-one” series with actor Eric Bossick, star of the upcoming movie “Tetsuo: The Bullet Man”, and directed by cult filmmaker Shinya Tsukamoto. The video series is set to debut early January. Like A Storm will also be having a “Storm the Dorm” contest during the Shinedown dates; fans will enter to win an acoustic performance from the group at their dorm during certain stops of the tour.  Additionally, fans nationwide are encouraged to take advantage of their last chance to enter the band’s current Paul Reed Smith Guitar Giveaway contest.  The winner receives an autographed guitar from the legendary craftsman.

With plenty on the horizon, LIKE A STORM is positioning themselves to be a mainstay force in America for years to come.

For more information on LIKE A STORM, including tour dates and locations, please visit them at www.myspace.com/likeastorm .