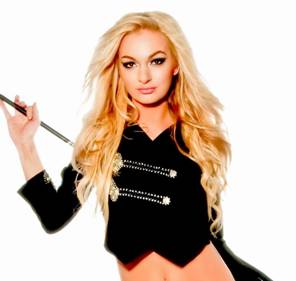 Frontiers Records is pleased to announced the signing of a new female music star from Norway. Her name is simply Issa and she is destined to stardom in the Melodic Rock musical world ! With amazing looks and an equally amazing set of pipes, Issa has been working hard on her debut album under the coordination of producer Ronny Milianowicz (Saint Deamon, Primal Fear, Dyonisus etc.).

Issa is a 26 years old girl from Oslo, Norway, since she was 17 she started working her way into the music business as a ”demo” singer for different labels in studios all around Norway and at the age of 19 Issa won a competition with almost 150.000 votes singing the song Fade away written by Stian Aarstad, who was earlier a member of Dimmu Borgir. The song got released on a record in cooperation with tv channel Fox Kids.

Somehow people just love listening to this girl sing and she soon hooked up with Gaute Ormaasen from the Norwegian Idol Show touring with him. Issa has also performed on more Metal and Rock records such as  Gaia Epicus and Illusion Suite. Issa has also played over 400 shows with Norwegian artist such as Postgirobygget, Dde, Jahn Teigen etc.

Musicians participating on her debut album include Uli Kusch on drums (Helloween, Masterplan , Gamma Ray), Nobby Noberg on bass (Saint Deamon, Dionysus, Nation), Peter Huss on guitars (Sinergy, Shining, and guitarist for world known Bosson “One In A Million Hit“) and Tim Larsson on keyboards (producer for Nick Lachey among others with Play Production).

Frontiers hopes to unleash this outstanding new talent to the unsuspecting public after the summer 2010. Stay tuned for more news.