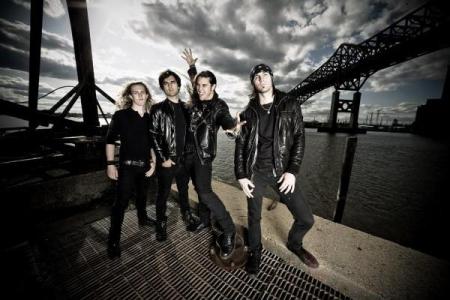 Roadrunner’s hottest new band, TAKING DAWN are thrilled to announce that they will be supporting the mighty KISS on their forthcoming UK arena tour this May.  The Las Vegas four-piece are currently tearing up the boards with labelmates Airbourne on their tour across Europe and release their debut album, ‘Time To Burn’ on 12th April.  The album is already available digitally via i-Tunes and all good digital stores, and you can also check out the video for the title track here:
http://www.youtube.com/takingdawn.

Frontman and guitarist, Chris Babbitt is super excited at the prospect of the KISS tour, enthusing: “I still think my guys are fucking with me.  Isn’t Ashton Kutcher supposed to punk only famous people?  Not even in 100,000 years did I think we’d really be opening for KISS…especially after the third farewell tour!  We’ve got our Love Gun locked and loaded, and can’t wait to strut the same stage as our heroes.  This is such an honour it’s almost too overwhelming for words”.

If you’re quick, you can also catch TAKING DAWN at the remaining UK dates with Airbourne as follows;